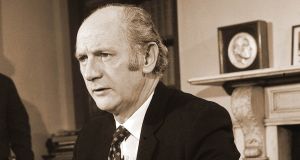 Jack Lynch: such was the taoiseach’s condition that he was brought whiskey to steady his nerves

When Fianna Fáil returned to office in June 1969 it would be the last election for three decades in which violence in Northern Ireland would not form part of the political backdrop. At that time, the Troubles described the birth pangs of the State and Bloody Sunday referred to a massacre in Croke Park.

After almost three years in office, Fianna Fáil leader Jack Lynch had finally received an electoral mandate but many still saw him as a caretaker taoiseach keeping the seat warm until a more charismatic successor could emerge.

While the revolutionary generation were slowly stepping out of the limelight, the cabinets of the 1960s still contained several IRA veterans and Eámon de Valera resided in Áras an Uachtaráin. Frank Aiken, who, as IRA chief of staff in 1923 had ordered republicans to dump arms, retired as minister for external affairs in July 1969 and was replaced by 46-year-old Patrick Hillery, a popular figure within the party, closely aligned with Jack Lynch and considered a likely successor.

Ministers Neil Blaney and Kevin Boland favoured some kind of military response, a position that resonated with a much larger body of opinion outside the cabinet

When the North erupted on August 12th-13th, 1969, Hillery was enjoying a painting retreat on Achill island and for several hours could not be contacted by government officials. Following the Battle of the Bogside, the days of quiet summer holidays for ministers were now well and truly over.

The Irish government’s profound interest in the emerging crisis was tempered by its inability to influence the course of events. Hillery had been rebuffed in London when he tried to express government concerns and told by his British counterpart that there was “a limit to the extent to which we can discuss with outsiders – even our nearest neighbours – this internal matter”.

But just as the British were telling Dublin to back off, the government was besieged with requests to support the Northern nationalist community.

The cabinet meeting of August 13th exposed deep divisions on how best to respond to the crisis. Ministers Neil Blaney and Kevin Boland favoured some kind of military response, a position that resonated with a much larger body of opinion outside the cabinet.

According to one ministerial adviser, “the entry of a mere company of soldiers ... would have brought Britain to the conference table for the first time in half a century on the basic question of the partition of Ireland”.

At 43 years of age, Fianna Fáil was experiencing something akin to a midlife crisis. Some in the party sought to recapture the radical fervour of its youth but many were cautious. Long spells in power had made most ministers anxious that Fianna Fáil’s hard-won ascendency should not be squandered on a reckless adventure.

For Boland, the tumult in Derry was “the moment of truth” for Fianna Fáil, an opportunity to fulfil its historic mission of uniting the country. Blaney told the cabinet they had “the same right to protect any citizen of the six counties as we would have had if it had happened in Cork”, deliberately referring to the taoiseach’s home county. Others maintained that an army incursion into Northern Ireland would expose beleaguered nationalists to pogroms. In a letter to Boland, party stalwart Seán MacEntee described Catholics in his native Belfast as “hostages for our good behaviour”.

The script Lynch had brought to the cabinet on August 13th was dissected and amended beyond recognition. Charles Haughey, who had emerged as an unexpected ally of Blaney and Boland, was entrusted with rewriting the document, which was subjected to further discussion and amendment before being unanimously approved.

When Lynch arrived at RTÉ studios, the deputy head of news, Des Fisher, looked at the taoiseach’s almost indecipherable notes and insisted they be typed up and made legible before he went on air.

Such was the taoiseach’s condition that Fisher brought him whiskey to steady his nerves. Lynch took the unusual step of asking Fisher what he thought he should do and, in particular, whether he should send the Irish Army into Northern Ireland as some of his advisers counselled.

When Fisher answered that he thought they would get about 20 miles into Down or Derry before being massacred by the British, Lynch confirmed that he had reached the same conclusion. However, the taoiseach hinted at some kind of intervention when he told the nation that his government could not “stand by” and see innocent people injured and perhaps worse.

While officially condemned, the introduction of British soldiers to Derry on August 14th and Belfast a day later allowed Dublin to take a step back. In his television address the taoiseach had said their deployment would be “unacceptable” and not conducive to restoring peace, “certainly not in the long term”. When the troops were sent in the optimists thought they would return to Britain within weeks; the pessimists thought they might have to stay until Christmas.

A delegation of Stormont MPs, including future SDLP co-founder Paddy Devlin, visited Government Buildings late on the night of August 16th begging for Irish Army intervention. The MPs failed to secure a meeting with the taoiseach.

Attempts to procure weapons for the defence of Northern nationalists would come to the fore during what became known as the Arms Crisis, leading to the sacking or resignation of more than a quarter of the cabinet. But that was all in the future.

Donnacha Ó Beacháin is associate professor at the School of Law and Government, Dublin City University. He is author of the book From Partition to Brexit: the Irish Government and Northern Ireland