Love across the wire: A British soldier’s Derry story

‘Half the regiment married local girls,’ says Michael who arrived in the North aged 20 in 1969 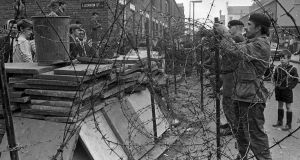 British army troops dismantle a barricade on Lucknow Street in the wake of conflict that arose after the Battle of the Bogside, in Belfast. Photograph: Independent News and Media/Getty Images

On August 14th, 1969, the army arrived in Northern Ireland. Newsreel footage shows 300 soldiers disembarking in Derry and lining up on the city’s quayside. The order is given; they march, “left, right, left, right”, towards the Bogside.

But one was missing. At home in Essex, Michael was watching on television. “I was on leave, and I was just sitting down with my bag of sweeties in front of the TV and I saw my regiment getting on the boat.

“The next thing, there was a knock on the door.”

It was a telegram, recalling him to his unit. He took a passenger ferry to Belfast, then was transferred to Derry on an Ulsterbus. “I’ll never forget it,” he says. “All I had was civilian [clothes] and a rifle.”

Michael is not his real name. For more than 40 years he has lived in a nationalist area of Northern Ireland, and few people know that he is a former soldier. Out of concern for his safety, security sources advised he not be identified in this piece.

In 1969 he was 20 years old, and a member of the First Battalion, the Queen’s Regiment. The Battle of the Bogside had been raging for 48 hours, with rioters determined to keep the RUC out of their area with stones and petrol bombs.

By the morning of the 14th the RUC was exhausted. Harold Wilson, the British prime minister, had already agreed that if the government in Northern Ireland requested troops, they would be sent in. Wearing steel helmets and carrying gas masks and rifles, they arrived that afternoon, and immediately began unrolling coils of barbed wire across the streets leading into the Bogside.

Inside the barricades, people celebrated the Free Derry; outside, the army now stood between them and the RUC.

In the years that followed, it would be referred to as the “honeymoon period”; Michael and his fellow soldiers were welcomed by local Catholic residents.

“They called us the teacup brigade,” he remembers, “because we lived on tea.

“We used to have pretend battles with the wains [children], and they would come up and look at our rifles.

“There was no real trouble when we arrived. It was just like home.”

Screaming their heads off

Michael was already familiar with Ireland. Like many, his father had emigrated to England from the west of Ireland; Michael joined the army in 1967 because it was the only way to find work.

“I was a ‘six-year-man’; that was the least you could do [in the army]. The only reason I joined was because I was unemployed, and I didn’t like being unemployed.”

His regiment was a “standby regiment”; their responsibilities included keeping watch over the barricades from the top of a building adjacent to the Bogside, as well as from the old city jail.

“You had a walkie talkie and anything that went on in William Street you went and phoned it in and it got sorted, you didn’t go in.

“[The Bogside residents] looked after themselves, so we didn’t go into their areas. We used to play with the kids [on Bishop Street], that was the nearest to the Bogside you could go.”

Michael recalls being deployed to a report of a riot in the Diamond, in the centre of Derry. “We arrived and there were women on the far side of the cenotaph, and they were screaming their heads off at us.

“I was worried because they were really screaming, I’ll never forget it.”

For the most part, relations were good. “We got to know the people and what they were really like, not what was said on TV. Half the regiment married local girls. We had love across the wire, all of that,” he says.

Some women were tarred and feathered for dating soldiers. “That never happened in our time,” says Michael. “It happened afterwards, after they [the IRA] started shooting soldiers.”

The first soldier to die in the Troubles was Gunner Robert Curtis, shot in the New Lodge area of Belfast in February 1971. Operation Banner –the code name given to the deployment of troops in Northern Ireland – would last until 2007. By then more than 700 soldiers, including members of the Ulster Defence Regiment and the Royal Irish Regiment, would lose their lives.

Michael’s regiment left Derry in 1970. He had already met a woman from the Bogside; they would marry years later, after Michael had left the army. Their wedding took place in a church yards from where he had once stood on sentry duty. “We had to run into the chapel because there was a gun battle on the walls.”

He had difficulty finding work; when he did get a job he encountered difficulties because of his English accent.

Michael still lives in Northern Ireland. During the Troubles, he says, he got on with people by following a simple rule: “no football, no politics, and mind your own business”.

He was not in Northern Ireland on Bloody Sunday, when members of the British army’s Parachute Regiment opened fire on anti-internment marchers in Derry in January 1972, killing or fatally injuring 14. A former soldier, Soldier F, is facing two charges of murder and four of attempted murder for his actions on the day.

“You had to account for every bullet you shot, so what happened there?” he asks.

“I was an ammunition storeman, it was my job to maintain and look after the weapons, and there is no way you can fire a weapon and get away with it.

“We had a yellow card. You couldn’t shoot until you’d read this yellow card, and by that time your adrenalin had gone. Where was the yellow card?”

If rules are broken, he stresses, then prosecution should follow, though he feels Soldier F is being made a “scapegoat”, prosecuted in place of “the higher-ups” – those who ordered the Parachute Regiment into the Bogside on Bloody Sunday. “They [soldiers] don’t shoot unless they’re told to shoot,” he says.

He believes delay is part of the tactic: “Get the people involved to die off.” The buck should have stopped with the commanding officers, he says, “but they can’t admit it, they won’t admit it”, because to accept what happened on Bloody Sunday “means there’s been a breakdown all the way through”.

In the army, he explains, “you do have people who are gung-ho. You can nearly tell when you look at them – the way they dress, how shiny their boots are. They get off on kicks like that.

“All the gung-hos are picked early,” he says. “They want people who will do the job. The vast majority of men in the army, they won’t shoot you unless their lives are in danger.”

“The Paras have got a reputation,” he said. Their conduct, he feels, brought the rest of the army into disrepute.

He is adamant the prosecution of soldiers is “not a witch hunt”, yet he questions whether it is possible to ever adequately address the long shadow of the Troubles. “It will never get dealt with. It’s an endless pit.”

Michael is now 70. He is proud of his time in the army. “It opened my eyes to the world,” he says. “If I hadn’t gone into the army, God knows where I’d be now.”