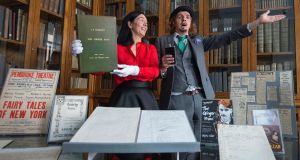 There are many stories surrounding the writing and publication of The Ginger Man, JP Donleavy’s great novel about student life in postwar Dublin in the late 1940s.

One of these centres on Brendan Behan, who visited Donleavy at Sycamore Cottage outside Kilcoole, Co Wicklow, where he wrote the book.

When Behan arrived some time in summer 1951, and found Donleavy was out, he let himself in to the cottage and proceeded to edit the manuscript of The Ginger Man.

Behan may have been a dissolute character in many ways but he was a diligent editor, and his scrawl is all over the first-draft manuscript of Donleavy’s novel.

He was the first to read Donleavy’s story and the first to recognise its significance, famously opining that it would “beat the bejaysus out of the Bible”.

Speaking on BBC Radio 4’s Desert Island Discs in 2007, Donleavy revealed that he still had the manuscript with the edited notes.

“I was furious at first over his advice, but I followed every suggestion he made,” he recalled.

The first typed draft of the book with Behan’s corrections is among a group of prize Donleavy-related exhibits that have been donated to the National Library.

In his later years Donleavy, who died in 2017 aged 91, accumulated a vast archive that filled 300 boxes and is now in the hands of the library.

The bequest includes a notebook with diary entries and correspondence with some of his friends, including comedian Billy Connolly and his wife, Pamela Stephenson, actors Susan Hampshire and Susannah York, and director George Roy Hill.

Donleavy also kept newspaper clippings from 1959 when the then archbishop of Dublin, John Charles McQuaid, succeeded in having the Gaiety production of The Ginger Man banned after just three performances.

The donation is being made by Donleavy’s children, Philip and Karen, through section 1003 of the Taxes Consolidation Act 1997, which allows a tax credit equal to 80 per cent of the value of the donated items.

National Library director Sandra Collins said the archive, collated by Donleavy’s good friend Bill Dunn, has the “making of a lot of scholarship” given its insights into the author’s life.

“It will be a wonderful resource for all those interested in 20th-century Irish writing and in JP Donleavy – the writer and his world,” she said. “He lived a long and colourful life.”

Donleavy’s final novel, A Letter Marked Personal, which he wrote in 2007, is to be published in October.

1 Coronavirus: More ‘striking’ evidence BCG vaccine might protect against Covid-19
2 Boris Johnson moved to intensive care after coronavirus symptoms worsen
3 Genetics shed light on origins of Irish strains of Covid-19
4 Coronavirus: 16 more people have died in Republic as public urged to ‘have patience’
5 Irish doctors on getting Covid-19: ‘In 90 minutes, I deteriorated quite rapidly’
Real news has value SUBSCRIBE