On this day 50 years ago: Cork residents offer to house Northern children at risk 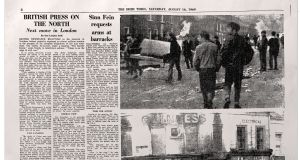 Belfast is deserted and extremely tense. Scenes of devastation are everywhere to be seen. Every conceivable object has been used to erect barricades. Single and double-decker buses; huge multiple-wheel lorries; overturned private cars; furniture and scrap iron are all being used to block off every street entering the Falls Road district, which is home to thousands of Catholics.

Many houses are now but smouldering ruins. To limit the manufacture of petrol bombs, station owners have been ordered to make electric pumps unworkable.

In the Grosvenor Road area scores of families who have been burnt out of their homes have taken shelter in houses scheduled for demolition. Parents have broken down the boarded-up windows to gain access for their families.

There are no bus services or taxis. Public houses, restaurants, cinemas and dance halls are closed. Lorries have been commandeered for use as ambulances and crudely painted with red crosses. At the Royal Victoria Hospital, patients are being discharged ahead of schedule to make way for further influx of casualties.

In another dramatic move, 300 British troops entered the Ardoyne district of north Belfast last night to the evident relief of local residents who have been subjected to three nights of unparalleled terror. Most of the women and children in Ardoyne have already been evacuated to safer parts of the city or to temporary homes in the Republic.

Residents wept with relief as the soldiers formed a guard line stretching for a mile along the Crumlin Road. The soldiers have erected wire barricades and are halting traffic.

Fr Aquinas McCarthy from the nearby Holy Cross monastery articulated the community’s sense of relief and fear for the future: “The people around here are all Irish and proud of it, but they welcomed the troops because they simply could not stand another night of terror.

“On Thursday and Friday they were subjected to dreadful violence – snipers’ bullets and petrol bombs. We had nothing to defend ourselves against the rifles of snipers and the people have lost confidence in the police. As I am speaking to you now I can see four snipers on the roof of a big mill in the Flax Street area. They’re not shooting, but what will happen when darkness falls? That’s what we’re dreading.”

British prime minister Harold Wilson is reported to be cutting short his holiday in the Isles of Scilly to fly to London tomorrow to meet Northern Ireland prime minister James Chichester-Clark for crisis talks. Two more battalions of riot troops are on standby in Britain to be sent to the North at short notice should the situation deteriorate further.

The minister for external affairs Patrick Hillery has arrived in New York to put the Irish case to the United Nations. Speaking to reporters, he stressed his government had not considered sending troops into Northern Ireland “but we are firmly of the opinion we should have our troops in as peacekeepers”.

While the British government considered the matter an internal affair, Hillery said “we strongly feel there are two nations claiming the territory” and that “the British government would be prudent to accept a peacekeeping mission”. Hillery is expected to meet the UN secretary general U Thant but it is hard to see how Dublin’s initiative can overcome Britain’s veto as a permanent member of the UN Security Council.

Since the outbreak of violence in Derry there have been very emotional mass meetings at Dublin’s GPO, usually estimated to be several thousand strong. Last night was no exception. Two-thirds of O’Connell Street was packed with demonstrators supporting the embattled minority in the six counties.

Organised by the National Solidarity Committee, the meeting hosted a diverse range of speakers, including public representatives from the North. The Republican Labour MP Paddy Kennedy said people in Catholic areas “are being massacred and the full responsibility for this annihilation lies with the Stormont government”.

His fellow Belfast MP, Paddy Devlin, said: “As we stand here tonight people are being shot down and the only way they can defend themselves is with guns. We have not got these and we need them badly.” The meeting passed by acclamation the following resolution: “We, the citizens, call upon the government to send troops to Northern Ireland forthwith to protect the lives of Irish citizens. The government must bear in mind the serious consequences which will inevitably follow a failure to act.”

Organisers distanced themselves from the rowdy hooliganism of a section of the crowd that broke away and marched to the British embassy leading to what gardaí described as “an unprecedented riot”. About 200 gardaí including the riot squad baton-charged a large crowd that approached the embassy throwing bottles and stones and shouted: “Send the Irish Army to the North”. About 30 people were injured.

Dozens of men arrived in Dundalk on three buses from Dublin en route to the North. They went to the Army barracks yesterday and demanded arms to use in the troubled areas but left empty-handed and marched back to the town centre. In a separate incident, 22 people were taken off the Dublin-to-Belfast trains at various stations in the North and taken to Belfast for questioning by the Special Branch. Although none of them was a known IRA member all bar one of those detained were sent back to Dublin.

A large demonstration organised by Sinn Féin took place through the main streets of Cork. Led by the Thomas Ashe Pipers’ Band, protesters carried such placards saying “Cork Bleeds for Derry” and “Cork Supports its Northern Brothers”. The lord mayor of Cork, Thomas Pearse Leahy, said his city could accommodate 1,000 children from Northern trouble spots. Following the death of nine-year-old Patrick Rooney in Belfast, the mayor had received numerous calls from residents offering accommodation for children whose parents would like to see them removed from danger temporarily .

“I will immediately provide accommodation for two little girls, who can partner my own two,” the mayor said.

In Limerick, the mayor, Alderman Steve Coughlan, appealed to local people to make their homes available for “those who wish to flee from the terror-stricken North”. If there is a large number who need to come urgently, mayor Coughlan said he would urge the Army authorities to make Knockalisheen Camp available, which 13 years ago housed refugees fleeing the communist dictatorship in Hungary.

The general secretary of the National Association of Tenants’ Associations has appealed to its 250,000 members to help the fund established for Northerners who have been burnt out of their homes. Meanwhile, minister for finance Charles Haughey has announced that he will make funds available for the relief of victims of the Northern strife. Haughey is due to hold immediate talks with the chair of the Irish Red Cross Society to identify how best to administer the funds.

* Donnacha Ó Beacháin is Associate Professor at the School of Law and Government, Dublin City University. He is author of the book From Partition to Brexit: the Irish Government and Northern Ireland.