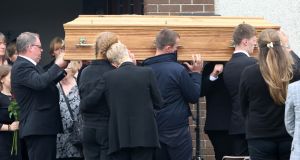 Co Galway student Jessica Moore, who died after falling ill at her secondary school debs dance on Sunday, ‘lived her short life to the full’, her father has told her funeral Mass. Photograph: Hany Marzouk.

Co Galway student Jessica Moore, who died after falling ill at her secondary school debs dance on Sunday, “lived her short life to the full”, her father told her funeral Mass.

Brendan Moore told hundreds of mourners who gathered at St Patrick’s Church in Bullaun yesterday that the family had since learned that the “focused and determined” 19-year-old scored 531 points in her Leaving Cert.

He said Jessica, from Loughrea, had wanted to live and attend college in Galway city but that “all these plans are gone now and all we have our memories”.

“We won’t get to share her 21st birthday, or her graduation. I’ll never get to walk her up the aisle, though I don’t know if that was ever going to happen,” he joked.

Jessica became ill at a dance in a hotel in Ballinasloe and was taken by ambulance to Portiuncula Hospital, where she was later pronounced dead. Gardaí are investigating the sudden death and are awaiting the results of toxicology tests.

Mr Moore said people were aware of Jessica’s talents at singing and performing, which were “her comfort zone, her place of refuge”. He said his daughter was “a complete rogue” with stories of how she snuck out the window of the family home’s and often debated in school about religion.

Mr Moore said this week was supposed to be “a series of celebrations” which included the Leaving Certificate results and CAO offers. He said his daughter left for the dance on Sunday following “a great day” and in “top form”.

“Everything was coming together for her perfectly,” he said. “She will always be our vibrant, funny, quirky 19-year-old who we all loved so, so dearly and we’ll miss terribly.”

He also thanked Jessica’s friends from St Raphael’s College who turned up to their home on Tuesday instead of going out celebrating their exam results.

“You all are an incredible group of young people who are all capable of achieving so much,” he said.

Offertory gifts including Jessica’s guitar, a chocolate bar and a Game of Thrones book were brought to the altar.

Jessica’s younger Ali sang renditions of She Used to Be Mine and Jealous of the Angels during the funeral mass while her brother Cian read a prayer.

Funeral celebrant Fr Benny Flanagan said Jessica worked in a local hotel and that when he ran into her last week, she said she wanted to study science in college.

“She was a character but she was full of creativity and sensitivity and responsibility,” Fr Flanagan added. “Then it happened, she pushed the boat out from shore. She didn’t see or was not aware of the dangerous undercurrents and the sharp rocks just under the surface and the extraordinary winds that were to arise.”

A recording of Jessica singing The Foggy Dew was played before the Mass ended and she was later buried at the adjoining cemetery.