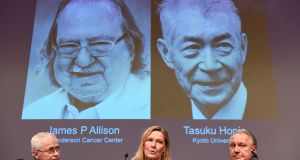 American James Allison and Japanese Tasuku Honjo won the 2018 Nobel Prize for Physiology or Medicine for discoveries leading to new approaches in harnessing the immune system to fight cancer, the award-giving body said on Monday.

“Allison and Honjo showed how different strategies for inhibiting the brakes on the immune system can be used in the treatment of cancer,” the Nobel Assembly at Sweden’s Karolinska Institute said, on awarding the prize of 9 million Swedish crowns (€870,000).

Medicine is the first of the Nobel Prizes awarded each year. The prizes for achievements in science, literature and peace were created in accordance with the will of dynamite inventor and businessman Alfred Nobel and have been awarded since 1901.

The literature prize will not be handed out this year after the awarding body was hit by a sexual misconduct scandal.

Both laureates studied proteins that prevent the body and its main immune cells, known as T-cells, from attacking tumour cells effectively.

Mr Allison, professor at the University of Texas MD Anderson Cancer Center, studied a protein that functions as a brake on the immune system and realised the potential for unleashing immune cells to attack tumours if the brake could be released.

Mr Honjo, professor at Kyoto University since 1984, separately discovered a second protein on immune cells and revealed that it too operated as a brake, but with a different mechanism.

“The seminal discoveries by the two Laureates constitute a landmark in our fight against cancer,” the institute said. - Reuters