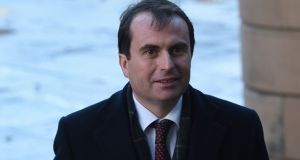 A former Fine Gael TD has been fined €750 for his part in an assault in a Co Monaghan pub last year.

Seán Conlan (42) had been charged with unlawfully assaulting and causing harm to Enda Duffy in Conlan’s family-owned pub in the Border town of BallyBay, Co Monaghan.

At a special sitting of the District Court on Tuesday, Judge Conal Gibbons said he recalled the evidence at a previous hearing at which Conlan was convicted, and said he considered the assault was at “the lower scale” of such offences.

He said it did not warrant a custodial sentence, a suspended prison term or an order for community service.

A victim impact statement was presented to the judge by Ms Fiona Murphy BL. The statement was not read out in court and Judge Gibbons said he was somewhat surprised to see that it contained some reference to the impact of media coverage on the victim. It had to be accepted, the judge remarked, that the profile of this particular case was of interest to the public and media, as is the situation in relation to different court cases.

The judge also noted the victim impact statement raised certain issues, even some constitutional issues, over which the court had “no control”.

Defence lawyer James McGuill handed in a number of testimonials outlining the “excellent character” of Conlan, whom, he insisted, had a “blameless record”.