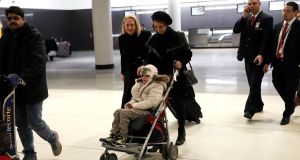 Alma Kashkooli, (12), from Iran who has a severe medical condition, is wheeled out of customs at New York’s John F. Kennedy International Airport by her mother Fahimeh Kashkooli who is living in the United States on a student Visa while studying at Fordham University Law School. Alma is in the US to have eye saving surgery according to lawyers for the family. Photograph: Reuters 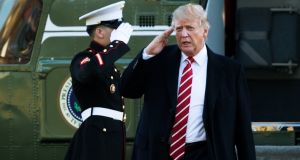 President Donald Trump salutes a Marines honor guard as he disembarks from Marine One upon arrival at the White House in Washington on Monday. Photograph: AP

The US justice department has urged a federal court to reinstate president Donald Trump’s controversial travel ban on people travelling from seven majority-Muslim countries, insisting that national security is at stake.

After a lower court judge blocked the president’s executive on Friday night, lawyers for justice department the filed a brief with a federal appeals court on Monday evening.

It was not immediately clear when it might issue a ruling. The battle could go all the way to the supreme court.

“The executive order is a lawful exercise of the president’s authority over the entry of aliens into the United States and the admission of refugees,” the department lawyers said in their submission to the San Francisco-based ninth circuit court of appeals.

The filing warns the courts against taking “the extraordinary step of second-guessing a formal national-security judgment made by the president himself pursuant to broad grants of statutory authority”.

It adds: “The potential national-security risks and harms resulting from the compelled application of procedures that the President has determined must be re-examined, for the purpose of ensuring an adequate measure of protection for the Nation, cannot be undone. Nor can the effect on our constitutional separation of powers.”

Mr Trump faces his third full week in office having to fight a legal battle on the constitutionality of one of his signature actions and an unprecedented struggle to force one of his senior cabinet nominees through a deadlocked vote in the Senate.

On Monday, the policy faced new, stark criticism in court documents. Lawyers representing the states of Washington and Minnesota explicitly called the measure “anti-Muslim” and derided attempts to do otherwise as “a sham”.

‘Sham of a secular purpose’

“Here, the sham of a secular purpose is exposed by both the language of the order and defendants’ expressions of anti-Muslim intent,” wrote the lawyers in a 32-page brief.

Even more virulent language was used in a brief submitted by 10 former government officials including former secretaries of state Madeleine Albright and John Kerry, and Michael Hayden, the former leader of the NSA and CIA under George W Bush. They accused the executive order of undermining the war on terror and the constitution itself.

Using another acronym for Islamic State, they argued: “It will aid Isil’s propaganda effort and serve its recruitment message by feeding into the narrative that the United States is at war with Islam.”

They added: “Blanket bans of certain countries or classes of people are beneath the dignity of the nation and Constitution that we each took oaths to protect.”

“The order represents a significant departure from the principles of fairness and predictability that have governed the immigration system of the United States for more than 50 years,” the brief stated.

In the immediate aftermath of Mr Trump’s signing of the order 10 days ago, airports saw large protests as travellers with valid visas were stopped from entering the country.

White House sources including the president have insisted only 109 people were affected and said most were merely delayed. Government figures for the number of visas revoked worldwide before the ban was suspended ranged from 60,000 to 100,000.

The initial decision by Mr Robart, a judge appointed by George W Bush, to block much of the order led to outraged tweets by Trump throughout the weekend, as he spent three nights at his Florida mansion.

Trump seemed to indicate that Mr Robart should bear the blame for any terrorist attack in the future. “Just cannot believe a judge would put our country in such peril. If something happens blame him and court system. People pouring in. Bad!” wrote the president.

The justice department, which is currently led by temporary appointee Dana Boente after acting attorney general Sally Yates was fired for refusing to defend the travel ban, had until Monday evening to file a response.

The case is expected to eventually end up in the supreme court, which has had a vacant seat for almost a year after the death of Justice Antonin Scalia in February 2016. Although Trump has nominated Neil Gorsuch, a federal circuit judge, to replace Scalia, Gorsuch may not be confirmed to the court before any ruling on a Muslim ban would be made.

The aggressive legal challenge Trump faces comes as his new administration is bogged down in a confirmation battle in the Senate.

Billionaire Republican mega donor Betsy DeVos’s nomination to be education secretary is on a knife-edge after two Republican senators said they could not support her.

Although Ms DeVos, an ardent supporter of charter schools, was not considered to be among Trump’s most controversial cabinet nominees when first selected, she now seems the most likely to lose a confirmation fight.

Ms DeVos stumbled throughout her confirmation hearings, suggesting a need for guns in schools to kill grizzly bears and seeming unprepared for many policy questions.

Her poor performance combined with ardent lobbying by teachers’ unions has led to a backlash, which has included Republican senators Lisa Murkowski and Susan Collins joining a unified Democratic caucus in opposing her nomination.

The result is a Senate currently split 50-50 on the nomination. Barring any last-minute defections, the tie would need to be broken by vice-president Mike Pence on Tuesday in his constitutional role as Senate president, the first time a vice-president has had to break a tie for a cabinet nomination.

Mr Trump made one of his first outings in his constitutional role as commander-in-chief on Monday when he visited MacDill air force base in Tampa, Florida.

The president - who was returning home from a weekend at his Mar-a-Lago resort, where he spent time at his Trump international golf course and attended a Super Bowl party - received a briefing from US central command, which oversees military operations in the Middle East and north Africa and is based at MacDill.

The meeting came just days after the first military casualty of the Trump administration, in a apparently botched raid by US special forces in Yemen.

White House press secretary Sean Spicer has repeatedly characterised the raid, which was approved by Mr Trump in a dinner meeting that included his son-in-law Jared Kushner and controversial political adviser Steve Bannon, as “a success”.

Mr Trump opened his address to troops at the air base by saying: “We had a wonderful election, didn’t we?”, before attacking the “dishonest media” whom he claimed, without evidence, were deliberately not reporting on some terrorist attacks in Europe. He expressed support for Nato but criticised members who had not paid “their fair share”.

Mr Trump is also facing new foreign policy challenges as John Bercow, the speaker of the House of Commons in the UK, made clear on Monday that the president would not be extended an invitation to address Parliament on any state visit. “We value our relationship with the US,” Mr Bercow told the House of Commons.

“If a state visit takes place, that is way beyond the pay grade of the Speaker. However, as far as this place is concerned, I feel very strongly that our opposition to racism and to sexism, and our support for equality before the law and an independent judiciary, are important considerations in the House of Commons.”

The White House did not respond to a request for comment on Mr Bercow’s statement.