Up to 13,000 secretly hanged in Syrian prison, says Amnesty

Amnesty International says in its newest report that a 'systematic campaign of mass hangings' killed up to 13,000 detainees in Syria's Sednaya prison between 2011 and 2015 and calls for a United Nations investigation. Video: Reuters 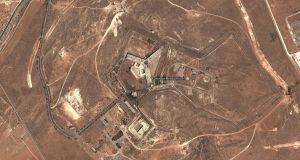 As many as 13,000 opponents of Bashar al-Assad were secretly hanged in one of Syria’s most infamous prisons in the first five years of the country’s civil war as part of an extermination policy ordered by the highest levels of the Syrian government, according to Amnesty International.

Many thousands more people held in Saydnaya prison died through torture and starvation, Amnesty said, and the bodies were dumped in two mass graves on the outskirts of Damascus between midnight and dawn most Tuesday mornings for at least five years.

The report, Human Slaughterhouse, details allegations of state-sanctioned abuse that are unprecedented in Syria’s civil war, which has left at least 400,000 people dead and nearly half the country’s population displaced.

It suggests thousands more people could have been hanged in Saydnaya since the end of 2015, after which former guards and detainees who spoke to Amnesty no longer had access to verifiable information from inside the prison.

Among the 84 people interviewed were four former guards at two key buildings, a “red building” in which civilian detainees were held and a “white building” that held former military members and where hangings were carried out in the basement. More than 12 months of research focused on 31 men who were held in both buildings. A military judge was also interviewed.

The witnesses claimed that once or twice a week 20-50 people at a time were hanged after sham trials before a military court. Their bodies were taken to the nearby Tishreen military hospital where a cause of death was typically registered as a respiratory disorder or heart failure.

They were buried on military land in Nahja, south of Damascus, and Qatana, a small town to the west.

The report’s author, Nicolette Waldman, said the estimate of the number of people hanged ranged from a minimum of 5,000 to a maximum of 13,000.

“There is no reason at all to expect that the hangings have stopped. We believe it is very likely that the executions are going on to this day and that many thousands more people have been killed,” she said.

“They came for them on a Monday. Before they were hanged, victims were condemned to death in a 2-3 minute hearing. The death sentence was signed by the minister of defence, who was deputised to sign by president Assad. It is inconceivable that all of the top officials did not know about it. This was a policy of extermination.”

Ms Waldman said the hanging victims were separate to claims of the systematic killing of more than 11,000 detainees in Syria from March 2011 until August 2013, which were documented by a photographer codenamed Caesar who worked for the Syrian military police.

The Syrian Observatory for Human Rights said last May at least 60,000 people had died as a result of torture or dire conditions in Syrian prisons from the earliest months of the anti-Assad insurrection.

Since then, Syria has been gradually torn apart. The initial uprising was met with a brutal crackdown and mass detentions, and by late 2011 it had started to transform into an armed insurgency that aimed to topple the four-decade Assad dynasty and its supporting state structure.

By mid-2012 the uprising had been joined by jihadists from outside Syria, who blended with hundreds of hardcore Islamists freed from Syrian prisons who had begun to splinter the opposition. All the while, mass arrests and detentions accelerated, as did an exodus of civilians from most parts of the country.

The war soon sparked the biggest refugee crisis anywhere since the end of the second world war. Mass immigration has since been a focal point of political discourse in Europe and the US, feeding the rise of populism and nationalistic leaders such as Donald Trump, whose travel ban prevented Syrians, among others, from entering the US, until the order was overturned by a federal judge on Friday.

Amnesty said non-state armed groups had also carried out serious human rights abuses against detainees. It singled out the al-Qaeda-inspired Jabhat al-Nusra and Islamic State as perpetrators of war crimes. But it said the “vast majority of detention-related violations since 2011 have been carried out by Syrian authorities”.

Witnesses to the killings in Saydnaya described a methodical routine in which those about to be hung were collected from their cell block in the red building in the afternoon and told they were to be transferred to another prison. They were instead taken to the basement of the white building, several hundred metres away, and repeatedly beaten.

They were taken before a military judge and condemned, before being hanged between midnight and 3am.

“Some of them initially did not know what the sounds were,” said Ms Waldman. “It is such a dehumanising and horrible experience in prison already.”

Amnesty said its witnesses had detailed each step of the process, with some giving graphic accounts of having heard the hangings being carried out in the room beneath them. The organisation said it had sought a response to its allegations from Syrian officials in mid-January but received no reply.

“What we have uncovered is beyond anything else we have seen,” said Ms Waldman. “This demands a new kind of response. These practices have to stop. It is one more step of diabolical intent by the Syrian authorities.”

1 US supreme court rules prosecutors can obtain Donald Trump’s financial records
2 Mother and five children sleeping in car while seeking accommodation
3 Six counties register no Covid-19 case over past week
4 Donald Trump is an amateur populist – the real trouble is yet to come
5 Covid-19: Small minority of pubs putting health of customers and staff ‘at risk’
Real news has value SUBSCRIBE