Terminally ill ex-nun: 'I have right to decide when I go to heaven'

Kate Tobin, suffering from multiple sclerosis, is embarking on a book-reading fundraiser

Kate Tobin, a former nun living with multiple sclerosis in Clonroche, Co.Wexford believes she has the right to choose when she dies. Video: Bryan O’Brien 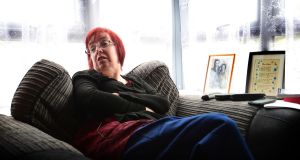 Kate Tobin, a former nun who is living with multiple sclerosis, at her home in Clonroche, Co Wexford. Photograph: Bryan O’Brien

Kate Tobin, a 51-year-old former nun who worked in the UK as a palliative care nurse for 10 years, is suffering through the latter states of multiple sclerosis. She wants to be allowed to die.

“When the disease gets worse I want to choose,” she says. “I want to be able to say when to stop my medical care and say, ‘just let me die, I have suffered enough’.”

Tobin, who lives in a specially adapted house in Clonroche, Co Wexford, says her future is stark – “a slow paralysis, needing more help and ultimately my death”.

But she is putting her remaining time to good use. To raise funds for MS Ireland and the Dyslexia Association of Ireland, she is getting people to sponsor her to read books. She is planning to read up to 500 this year, a remarkable total. “It’s about the only thing I can do and I love to read.”

She says while other people had told her she couldn’t decide when she dies, she disagrees.

She says one woman told her she should get on with her life and live it out to the end without complaining. “But they’re not suffering the pain and the degradation I’m going through every day and now that I have progressive MS there’s nothing medically that can be done for me.”

“I am of the belief that when I die, God won’t say, ‘Hey Kate, you’re a bit too early for heaven.’ Instead he will say, ‘Welcome home my child. You have suffered enough.’ That’s how I see my life,” she says.

“I’m suffering my purgatory here on Earth so I believe I have the right to choose when I go to heaven. I have done enough good deeds and suffered enough while I’ve been on Earth to deserve to go to heaven.”

Tobin notes that many other countries allow terminally ill patients the right to die. But she does not believe it is a decision to be taken lightly.

She has planned her funeral, details of which her brother in Dublin has locked in his safe.

“Originally, the family wanted me to be buried with my parents but I have chosen to be buried in a plot on my own because when they come to visit mum and dad’s grave I don’t want them to think of how much I suffered or anything. If they want to come to my grave, they’re coming to my grave and not mum and dad’s,” she said.

She has no fear of death. “I worked in England in a hospice for 10 years, from staff nurse up to sister, so death was an everyday or night occurrence,” she says.

“I know I’m going to die. I’m probably luckier than people that have sudden deaths. I’m now facing the reality that I am going to die. How fast I die is another story and when I was so ill last year I couldn’t wait to die.”

As a former nurse, she knows how death works. “I know the things I don’t want. I don’t want to end up in hospital having to be fed with a peg feed through my stomach and I don’t want a drip. Just so long as they inject me with painkillers to keep me comfortable that’s it. I don’t want anything to prolong my life.”

She spent most of her adult life in England, where she joined a French order, the Daughters of Providence, when she was 20. “I left that order when I was 26 and worked for the Church of England and became a Catholic chaplain for her majesty’s prison service.”

She still felt called to the religious life and joined the Augustinian Sisters, a nursing order, in Liverpool.

“I worked in their nursing home for the three years until I had taken my vows and they thought it would be a nice idea if I trained as a nurse.

“After two years of training they thought I was having such a good time as a student nurse – I don’t quite know how they worked that because it was hard work – and so deciding between the convent, nursing won out. At 33, I qualified as a nurse and it became such a loving career I’m glad I made the decision I did.” Beginning as a staff nurse she ended up as a sister but ended up having to return to Ireland to look after her late mother, who was ill.

At 46, Kate began to show the first signs of MS. Originally from Lismore, Co Waterford, she moved to Clonroche last year as her condition worsened. Her MS was diagnosed as progressive last December.

Prior to the general election last year, she says she was promised appropriate furniture by the HSE and that she would get more than 14 hours of care a week, but after the election she was told there were insufficient funds for either.

She speaks fondly of her godson and nephew Darragh (11) and niece Clodagh (6) who live with their father in Dublin. She started her book-reading fundraising efforts for both the Dyslexia Association of Ireland and MS Ireland because Darragh is dyslexic.

“I love reading and hope to read between 400 and 500 books in the year,” she said. “People from Wexford have been wonderful in supplying books to me. We’re hoping people will do coffee mornings or cake sales or any other fundraising.”

She estimates she reads “a book and a half a day”. But if she is having a bad night due to spasms and is unable to sleep, she will read through the night.

“One of the carers counted that last year, at my leisure, I read 390 books. There were weeks I didn’t read at all,” she said. “I think this fundraising has given me a new lease of life.”

Anyone wishing to donate to the book-reading fundraiser for the Dyslexia Association of Ireland and MS Ireland can do so via the Ulster Bank in Enniscorthy, Co Wexford, account number 1060856; sort code 98-56-90.