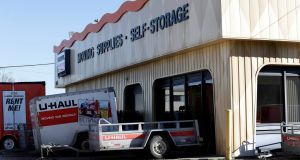 The scene where the remains of six infants were found in various states of decomposition in Winnipeg, Canada in 2014. File photograph: Lyle Stafford/Reuters

A Canadian judge found a mother guilty on Monday of concealing the decomposing remains of her six babies in a storage locker.

Andrea Giesbrecht, who turns 43 this week, was charged with six counts of concealing the body of a child in October, 2014.

Staff at storage company U-Haul, a subsidiary of Amerco , discovered the decomposed bodies in her locker after she fell behind on payments.

Police then found the remains of five boys and a girl, at gestational ages ranging between 34 and 40 weeks, in garbage bags, plastic bins and pails, along with children’s toys and clothing.

One infant’s remains were encased in concrete and another in a detergent like powder, and all were too badly decomposed to determine a cause of death.

The remains of all six infants were linked to Giesbrecht and her husband through DNA evidence.

Giesbrecht’s defence lawyers had argued that she was not concealing the remains, but saving them.

But Judge Murray Thompson ruled in Manitoba provincial court in Winnipeg that Giesbrecht packed up the bodies to keep them secret, and used an incorrect address and her maiden name for the storage locker account.

He accepted experts’ testimony that the babies were likely born alive.

The couple has two other children.

Each charge carries a maximum penalty of two years in jail.

Sentencing will happen at a later date.