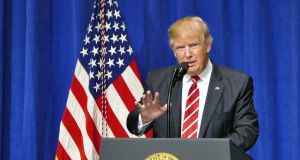 Donald Trump speaks to members of military during his first visit to the headquarters of the US central command at MacDill Air Force Base, Florida on Monday. Photograph: James Borchuck/Tampa Bay Times/AP

Up to three-quarters of students in some of the State’s colleges are reliant on grant support, according to new figures that highlight the scale of the class divide in Irish higher education.

School-leavers from more affluent backgrounds are much more likely to have places in universities offering high-points degrees.

2. Film and TV studios sue over illegal downloads in State

Up to 1.3 million people living in the State may be involved in illegally accessing the work of six film and TV studios via various websites, a court has heard.

The six studios, all members of the Motion Picture Association, have brought an action in the Commercial Court aimed at stopping the alleged “massive” illegal downloading of their work. 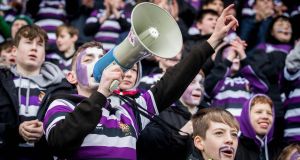 As many as 13,000 opponents of Bashar al-Assad were secretly hanged in one of Syria’s most infamous prisons in the first five years of the country’s civil war as part of an extermination policy ordered by the highest levels of the Syrian government, according to Amnesty International.

Many thousands more people held in Saydnaya prison died through torture and starvation, Amnesty said, and the bodies were dumped in two mass graves on the outskirts of Damascus between midnight and dawn most Tuesday mornings for at least five years.

Vaping has been given an emphatic thumbs up by health experts after the first long-term study of its effects in ex-smokers.

After six months, people who switched from real to e-cigarettes had far fewer toxins and cancer-causing substances in their bodies than continual smokers, scientists found.

The US justice department has urged a federal court to reinstate president Donald Trump’s controversial travel ban on people travelling from seven majority-Muslim countries, insisting that national security is at stake.

After a lower court judge blocked the president’s executive on Friday night, lawyers for justice department the filed a brief with a federal appeals court on Monday evening.