Despite ‘free fees’, are universities still bastions of privilege? 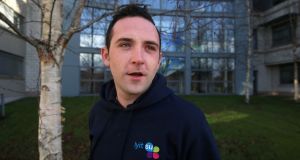 Dylan McGowan, president of the student union at Letterkenny IT: “Loans are not the answer to financial difficulties. It would be a catalyst for even more financial problems.” Photograph: Declan Doherty

At one point, Dylan McGowan was working five nights a week in a Smyth’s toy store to help make ends meet while in college. Now, as president of the students’ union at Letterkenny Institute of Technology, McGowan sees large numbers of students struggling to overcome financial hurdles on a daily basis.

“There are lots of students who aren’t from well-off backgrounds who need financial support to get through college,” he says. “The college chaplain has had to give loans to help students in financial trouble. It causes a lot of stress for students, especially if you’re waiting for your grant to be approved.”

In fact, Letterkenny IT has the highest proportion of grant-holders of any third-level college in the country: Almost three-quarters of its full-time students are entitled to some form of financial assistance from the State.

Grants are an important indicator of access to third-level across the social classes. That is because because eligibility is mainly based on an assessment of the income of students or their parents.

Income eligibility thresholds range from about €40,000 upwards a year, depending on factors such as the number of dependant children.

An Irish Times analysis on the proportion of students on grants across the higher and further education sector last year contains some revealing findings. It shows a striking class divide, with students from better-off families far more likely to occupy places at the country’s top universities.

For example, only a minority of students at UCD (27 per cent) and Trinity College Dublin (28 per cent) are in receipt of grants. Students from less well-off backgrounds, by contrast, are much more likely to be studying at institutes of technology.

The pattern is even more extreme among institutes of technology in regional areas. While Letterkenny IT has the highest concentration of grant-holders (74 per cent), it is followed by Athlone IT (73 per cent) and IT Carlow (71 per cent).

These figures appear to show that well-off families still have a firm grip on university places, despite the rapid expansion of higher education and the introduction of “free fees” two decades ago.

The bulk of the growing numbers attending third level in recent decades has been concentrated on institutes of technology. Our top universities, on the other hand, seem to have retained their reputation as bastions of privilege.

This is despite numerous access initiatives and attempts to broaden student intake. The figures are important for policy-makers seeking to promote greater equality of opportunity.

As well having an educational advantage, middle-class students are far more able to draw upon family resources and have access to influential social networks to help them land work experience or internships while they study.

More can be done

Mark Rogers, UCD’s registrar and deputy president, rejects the notion of UCD as privileged. But he accepts that more can be done to promote greater equality of access: “We need to improve the figures, but they don’t represent an attitude of the university.”

UCD’s location in affluent south Dublin means it is bound to have a higher proportion of better-off students, Rogers says. Still, there is more to it that just geography.

“I wouldn’t frame it as a class divide, but as a generational expectation . . . One of the biggest ways we attract students in the fact that their parents have been in higher education.”

He says UCD is working hard to attract students who are the first in their families to go to college. This, he says, can be the start of a multigenerational change.

“That is why we run programmes to widen participation,” he says, “and we work hard to get money to fund scholarships so we can encourage those students to come.”

According to Rogers, UCD is giving out record numbers of scholarships and increasing the numbers from under-represented backgrounds.

Change, he says, will not come overnight. It is a long-term process that, he says, the university is committed to.

In the meantime, Dylan McGowan says those students who are the first in their families to progress to college are among the most vulnerable. They may qualify for a grant, or fall just outside the income thresholds. Either way, the cost of college put them under particular pressure.

He says a student loan scheme, which is now under consideration, will only make things worse for these students.

“I think college education should be State-funded. Loans are not the answer to financial difficulties. It would be a catalyst for even more financial problems . . . We deserve to be educated; we do not deserve a €20,000-plus debt on our shoulders.”