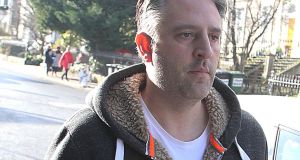 David Piele (40), a UK National with an address at Rectory Way in Bray, Co Wicklow, was brought before Dun Laoghaire District Court where he was charged with deception. Photograph: Stephen Collins / Collins Photos

Two men have appeared in court charged in connection with an alleged forestry investment fraud.

Det Inspector Cathrina Gunne of the Garda National Economic Crime Bureau (GNECB) told Judge Michael Walsh that Mr Hevey was arrested at his home on Monday morning and he was then taken to Dun Laoghaire Garda station where he was detained overnight.

He was charged with the two offences at 3.25pm on Tuesday after which he made no reply, she said.

He is accused of deception by inducing Kari Wahlstrom, a Swedish national, to pay him the sum of £52,000 at Allied Irish Bank (AIB), Dun Laoghaire, Co Dublin on February 23rd last year.

His second charge states it is alleged that on June 13th last year at AIB on George’s Street, in Dun Laoghaire he was in possession of €1,982,825 in crime proceeds, contrary to the Money Laundering Terrorist Financing Act, which can carry a maximum 14-year sentence.

Det Inspector Gunne objected to bail telling the court that the defendant was a a director and shareholder in the firm Arden Forestry Management Ltd.

It was alleged the company investors, who are all based outside the State, transferred large sums to the AIB account which was set up in 2014 and it appeared as if they were investing in a legitimate forestry business with legitimate folios, sites and timber certificates. It was alleged investors were provided with false documentation.

In relation to the deception charge, Det Inspector Gunne said that when Mr Wahlstrom requested verification of the investment he was given false documentation and a false folio.

She told the court there was strong documentary and digital evidence as well as witnesses and she feared that Mr Hevey would not stand trial and would evade justice if granted bail. It was also alleged he used the alias James Baker in the firm’s brochure, she said.

Judge Walsh noted from defence solicitor Dara Robinson that married father-of-one Mr Hevey has lived at his home for the past nine years and there is a mortgage on the property. His wife and father attended the hearing.

Mr Robinson said his client has co-operated with court orders in relation to the Arden Forestry Management Ltd’s bank account which has been frozen.

The solicitor said Arden Forestry Management Ltd is being put into liquidation.

Directions from the DPP need to be obtained, the court heard. Mr Hevey, who remained silent during the hearing, has not yet indicated how he will plead.

He was remanded in custody with consent to bail on these terms and will face his next hearing on Thursday.

Garda Siobhán Moore of the GNECB gave evidence of arresting Mr Piele at a property he was renting at Rectory Way in Bray, Co Wicklow.

He was charged under Section 6 of the Criminal Justice Theft and Fraud Offences Act. It is alleged that on February 23rd last he obtained by deception £52,000 from Mr Wahlstrom at a branch of AIB in Dún Laoghaire.

Garda Moore told the court that while Mr Piele co-operated with the garda investigation and had his lawyer also engaged with Mr Wahlstrom in a civil legal action, she believed he was a flight risk and should not be granted bail.

There could be further charges, she added.

She agreed Mr Piele was living with his partner and two children in Bray.

Granting bail on a cash bond of €5,000 and a surety of a further €5,000, Judge Watkins ordered that he surrender his passport, sign on with gardaí twice daily between 7am and 11am and 4pm and 9pm; and be contactable by mobile phone at all times.