Plan to open injection facility in Dublin for drug users 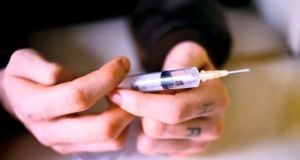 The proposed injection centre would open for 12 hours a day, seven days a week and would cost between €1.5 million and €1.8 million per year. Photograph: Getty Images

The Government will on Tuesday discuss legislation which would exempt drug users from prosecution if found with certain illegal drugs in a supervised injection facility.

Minister for Drugs Catherine Byrne will seek approval to proceed with plans which would open such a facility in Dublin’s city centre.

The centre would open for 12 hours a day, seven days a week and would cost between €1.5 million and €1.8 million per year.

Government sources stressed the Misuse of Drugs Act, which controls the possession of substances, will still apply.

Exemption from prosecution will only be applicable to authorised users when on the premises and injecting with the licence holder’s permission.

A Government source stressed: “In all other circumstances, inside and outside a supervised injecting facility, the offence of possession of a controlled drug still applies.

“The possession of a drug for the purpose of selling and supplying it to another is unaffected and remains a crime.”

Gardaí will be able to enter the premises without a warrant but they will not be able to arrest those inside.

There has been some concern that gardaí may be unable to adequately enforce the law while reflecting the Government policy.

Ministers have said the law must be clear and insisted there can be no ambiguity which would affect the powers of the gardaí.

The legislation will also provide an exemption for licence holders to allow them to possess or prepare a controlled substance on the premises.

The initiative, which was first proposed by the former Labour Party minister of state Aodhán Ó Ríordáin, has caused some concern.

However, Ms Byrne will stress the facility will not become a free-for-all for those who want to inject drugs.

Government sources say the aim is to minimise the harm associated with injecting drugs by providing a controlled environment.

The Health Service Executive will be asked to run the facility and will consult with An Garda Síochána and community groups before its establishment.

Minister for Education Richard Bruton has requested that the centres do not open near schools.

Mr Bruton has asked that proximity to children must be considered as part of the discussion on location and called for schools to be consulted ahead of any decision being made.

The legislation proposed by Ms Byrne is not prescriptive in terms of location but sets out policies which should be considered.

The level and the nature of drug use, paraphernalia and incidents of overdose or death should be factors, according to the Minister.

The legislation, if passed by Cabinet, will be debated in the Dáil and the Seanad.

It is expected the facility may be open by September. It will not be a new building but one that is unused at present.

If the pilot project is successful, it is envisaged a number of others will be opened across the country.

However, funding has only been set aside for one facility and the Department of Health has been advised any additional spend must come from within expenditure allocations.