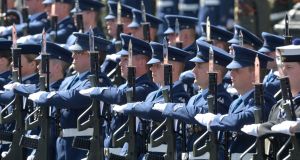 Members of the Defence Forces, Army, Navy and Aer Corp at the GPOin Dublin during the Easter Sunday Commemoration, marking the 103rd Anniversary of the 1916 Easter Rising. Photograph: Alan Betson/The Irish Times

Personnel in the Defence Forces may benefit by less than €1 per day before tax from increases in allowances aimed at tackling recruitment and retention problems, Fianna Fáil has claimed.

Officers in the Defence Forces also maintained that leaks from a forthcoming report by the Public Service Pay Commission would suggest “conservative” recommendations and represent a missed opportunity to address the problem of staff retention.

The report will suggest increases in a range of allowances paid to Defence Force personnel as a means of boosting take-home pay.

Patrol duty allowance, payable at €48 per day to naval personnel at sea, is expected to increase to the levels paid before the financial crisis when they were about €53 to €55 per day depending on rank.

Military service allowance, paid to most members of the Defence Forces at €42 to €123 per week, is also likely to increase. This payment compensates for disadvantages associated with military life, including unsocial hours and exposure to danger.

Industrial Relations News reported this week that the military service allowance would increase by 10 per cent, with a minimum rise of €350 per year.

It said the commission is also looking at restoration of the 10 per cent cuts applied to other military allowances under the 2013 Haddington Road agreement. The commission is also understood to have been looking closely at the reintroduction of a loyalty bonus for Air Corps pilots to persuade them to remain in military service. Many pilots have left the Air Corps to work for commercial airlines, leading to personnel shortages.

Fianna Fáil spokesman on defence Jack Chambers said if the reports prove to be accurate it would mean a private with up to three years’ experience “stands to benefit to the tune of €0.96 cent per day on the military service allowance – and that’s even before tax”.

Mr Chambers said Defence Force personnel are the worst paid State employees across the entire Public Service and if this news is anything to go by, nothing will improve.

“Both the Minister for Defence and Minister for Public Expenditure have clearly blatantly ignored each of the recommendations offered to them by military management in relation to pay and retention issues,” he said. “The future capacity and capabilities of our Defence Forces is very much at risk. ”

The Representative Association for Commissioned Officers said on Friday that it is hard to see how the limited measures – reported to be set by the commission in its forthcoming report – would restore confidence of members and prevent further exodus of trained personnel.

“In fact, such a limited award may act as a catalyst for further retirements and discharges as it would confirm in the minds of personnel that this Government does not value military service and the sacrifices military personnel take on.”

A spokeswoman for Minister for Public Expenditure Paschal Donohoe said he is awaiting the commission’s report.