Mannix Flynn tackles People Before Profit for acting like Isis 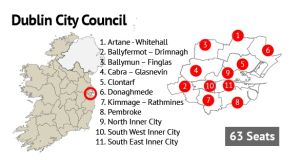 In an impassioned speech following his win, Mr Flynn said the experience of dealing with People Before Profit during the recount process has been “traumatic” and he compared the party and its supporters to the “Taliban or Isis” in their behaviour at the count centre in recent days.

“People Before Profit have no regard for democracy” and had sought to “undermine the democratic process,” he said.

On Sunday, a relative unknown, Hazel Chu became the first councillor elected in Dublin city and the first Green elected nationally in what will be a bumper day for the party, and the best local election result in its history.

Party leader Eamon Ryan said he was “thrilled” by Chu’s success in her election at the first count in the five-seater Pembroke ward with 4,069 votes - almost double the quota. He predicted the party would secure eight or even nine seats in the city of the 10 candidates the Greens ran for the city’s 11 wards.

With the possibility that the Greens could be the largest party on the council Mr Ryan said their strategy for the coming term would be “about more than just dividing up mayors and chairs” and would see the party pushing for real environmental measures to be taken at council level.

Chu born in Ireland, to parents from Hong Kong, is the partner of sitting Green city councillor Patrick Costello. She said it was “a bit overwhelming but great privilege” to be elected.

Two Green candidates who were celebrating in the RDS were Michael Pidgeon and Hazel Chu, both of whom are poll toppers.

Hazel Chu topped the poll in the Pembroke area with more than 2,000 votes above the quota, told The Irish Times: “Politics was never part of what we do. Both my parents were kitchen workers, they washed dishes. It wasn’t until I met my partner Patrick Costello who is, hopefully, a councillor in Kimmage Rathmines because he is topping the poll, that I decided to get involved in the Greens. I decided you know what, I’ll put my name forward.”

Mr Pidgeon said at one stage he expected to have to fight for the last seat instead of topping the poll. “I am a little bit in shock. I’m really humbled. We thought we would be scrapping away for the last seat here. There hasn’t been a Green councillor here for 25 years,” he said. “There is a part of me that’s aware that we worked really hard on the campaign. This isn’t a personal vote, it’s not even really a party vote. It’s a vote about the issues the Government are not tackling. From what I can tell, looking at the areas where we got the votes, they were coming in from areas including areas that wouldn’t have been traditionally Green at all.”

French-born Sophie Nicoullaud was elected for the Green Party in the Ballyfermot-Drimnagh Dublin City Council ward, as yet another first time candidate brought in on a surge of popularity for the party.

Sitting Sinn Féin councillor Daithí Doolan topped the poll in the ward, and was followed by Solidarity-People Before Profit candidate Hazel de Nortúin on the eight count. A strong number of transfers for Ms Nicoullaud, who moved to Ireland in 2006, saw her take the third seat in the ninth and final count.

Independent councillor Vincent Jackson retained his seat, finishing behind Ms Nicoullaud. It was initially announced that Michael Jackson had been elected to the council, a mistake quickly corrected by the returning office team. Fianna Fáil’s Daithí de Róiste took the last seat in the ward, beating the Labour Party candidate Michael O’Sullivan by 178 votes.

The Greens knocked another one out of the park with Claire Byrne, one of their three sitting councillors, topping the poll in the South East Inner City. Byrne was a comfortable winner with 1,961 first preferences ahead of the 1,144 quota in this five seater.

Sinn Fein’s Chris Andrews, once a Fianna Fáil councillor, but now a full council term in Sinn Féin, took a seat after the fourth count. However, the rest of the field is very spread out, with a large number of first timers in this ward and no one else with a particularly impressive first preference showing.