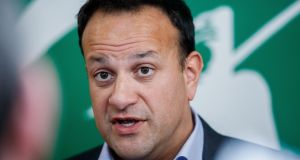 Taoiseach Leo Varadkar has described as an “individual tragedy” the case of couple involved after a termination was carried out at the National Maternity Hospital in Dublin for reasons of fatal foetal abnormality, where a test later showed no abnormality was present.

Speaking in Tullamore, Co Offaly on Friday, Mr Varadkar said his heart went out to the couple who had “lost a very wanted child”.

He said he knew there had been similar cases in other countries where “wrongful abortions” had taken place.

“Being a doctor and being aware of the limitations of science, I am aware that these cases can happen but that doesn’t take away at all from the individual tragedy that has happened here,” he said.

Minister for Health Simon Harris also expressed his concern for the couple involved.

“The Minister’s overriding concern is for the couple involved and respecting their privacy,” a Department of Health spokeswoman said.

“The Minister believes that an appropriate external review is warranted into the matters that arise here and it is important to await its findings.”

Minister for Foreign Affairs and Tánaiste Simon Coveney said politicians and others should be cautious about commenting on the case.

“This sounds to me like a very tragic case so we need to be very careful with what we say and how we comment in relation to it. I think what is important now is the individuals and the family concerned are getting the supports that they need,” Mr Coveney said.

“There is a full and independent investigation into what happened so we can clearly understand what happened. If there are policy consequences to that, we can judge it at that stage.

“I think we should be careful with any conclusions that might be drawn at this stage in the absence of all of the information that will undoubtedly be put together in the coming weeks.”

Meanwhile, the Master of the Rotunda maternity hospital said earlier he is aware of one case in his hospital where a foetal abnormality was identified in a test before a subsequent test showed there was no abnormality.

Professor Fergal Malone ’s comments on Friday came after it emerged an independent review into the case at the National Maternity Hospital is planned.

This review is expected to be carried out by the Royal College of Obstetricians and Gynaecologists (RCOG) in the UK in response to a complaint made by a couple who attended the hospital.

RCOG said it has not yet received a formal approach to undertake this review but would consider any approach. Informal conversations have taken place between the NMH and RCOG on the issue.

The solicitor for the couple at the centre of the Holles Street termination case has said that the couple are “utterly, utterly mentally and physically devastated” by what has happened.

“They want answers and they must be at the heart of any investigation,” Caoimhe Haughey told RTÉ radio’s News at One.

The couple wants “answers, the truth and transparency.”

The woman involved in the National Maternity Hospital case was tested for a potential abnormality in chromosome 18, which can give rise to a fatal foetal abnormality known as Edward’s Syndrome, or Trisomy18.

The Chorionic villus sampling (CVS) test, which was processed in the UK, involves taking cells from the placenta, which are split into two samples.

The first sample, which was processed in five days, showed signs of the abnormality. This test is regarded as 99 per cent accurate, with a false positive rate of just 0.15 per cent.

On the basis of this result, the couple opted for a termination, which was carried out in Holles Street two months ago.

However, the second sample, which took two weeks to process and involved the growing out of cells, came back normal.

The hospital and the UK testing facility accept this latter test result as being correct but stand over the accuracy of the work performed.

Master of the Rotunda Professor Fergal Malone said on Friday in cases where there is a diagnosis of a fatal foetal abnormality, two thirds of women chose to terminate once the two weeks CVS result has come back, but some opt to let nature take its course.

He said a fatal foetal abnormality can be “quite complex interpret.”

While he did not have the details of the specific case now the subject of the inquiry at National Maternity Hospital, he said such diagnoses are very technical.

Speaking on RTÉ radio’s Today with Sean O’Rourke show prof Malone said early screening tests are carried out by a blood test and an ultra sound.

If there is a query in relation to these tests, then a diagnosis is sought through a CVS test or amniocentesis.

He explained the CVS test involves placental cells while amniocentesis is carried out directly on the foetus. However, sometimes there can be different genetic readings between cells in the placenta and the foetus.

One of the caveats from the laboratories is that the CVS test should be interpreted in conjunction with an ultrasound, he added.

“When the CVS test is taken, two different samples are sent. One for a rapid result which comes back within 48 hours and the other which can take up to two weeks and it is 100 per cent.”

Prof Malone acknowledged the rapid test can give a false positive. “That’s why it is necessary to look at the total picture. If there is no ultrasound abnormality most laboratories recommend to wait for the full two weeks.

“But some patients are not prepared to wait the two weeks and want to continue to termination. Generally we recommend that they get the total picture.”

Prof Malone said he was aware of one case in the Rotunda where an abnormality was identified in the rapid CVS test, but there was no indication in the ultrasound. When the second result came through in two weeks it was normal, he said.

Different laboratories in the UK have different protocols, but the laboratory with which most Irish hospitals work, has the caveat that action should not be taken on rapid test results unless there is other corroboration.

Prof Malone said he did not think this case would affect the public’s confidence in the screening and diagnostic service in the country.

“Patients should be confident that they will get good advice. It is important to get the total picture.”

Since the beginning of this year 500 DNA genetic screening tests using blood samples have been taken at the Rotunda, he said.

Women over 35 years-of-age are at a higher risk of fatal foetal abnormality, Trisomy18 which has led to the rise in such tests, he explained.

“The vast majority come back showing they are unlikely to have that genetic problem. A small number then opt for the CVS test or amniocentesis.”

CVS, the prenatal test used to diagnose chromosomal abnormalities, involves the taking of cells from tiny projections on the placenta, the chorionic villi, and sending them to a lab for genetic analysis.

The Royal College of Obstetricians and Gynaecologists (RCOG) said in a statement: “We can confirm the RCOG has not yet received a formal approach to undertake this review. Should an approach be forthcoming, this will be considered in the usual way.”