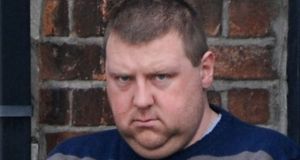 Darren Murphy who was jailed for murdering Olivia Dunlea in February 2013 has been allowed compassionate leave to visit a grave. Photograph: Daragh Mc Sweeney/Cork Courts Limited.

The family of young mother of three have expressed their anger and upset at discovering that the man convicted of her murder is being allowed compassionate leave by the Irish Prison Service to visit a family grave.

Ann Dunlea, whose sister Olivia (36) was murdered by Darren Murphy (42) at her home in Passage West, Co Cork, spoke on Friday of the family’s shock at discovering her sister’s killer is being allowed out of jail to visit a grave.

“We were contacted last weekend to say he was being given compassionate leave to visit the grave of a relative in Passage West - it is very upsetting - we just cannot believe it - the shock and anger we feel is unreal.”

Speaking on the Neil Prendeville Show on Cork’s Red FM, Ms Dunlea said the only deaths in Murphy’s immediate family that they were aware of were those of his parents, who died in September 2017 and May 2018.

“They (the Irish Prison Service) let us know he was getting compassionate leave and we contacted them back saying we were not one bit happy. We were actually disgusted,” said Ms Dunlea.

In June 2018, Murphy of Dan Desmond Place in Passage West was convicted at the Central Criminal Court of the murder of Ms Dunlea at Pembroke Crescent in Passage West on February 17th 2013.

Murphy, who had offered a plea of manslaughter which was rejected by the DPP, had been convicted twice previously of Ms Dunlea’s murder but had successfully appealed each of those convictions.

He has been in jail for a total of six years and has served just over one year of his current life sentence but he has appealed the most recent conviction and the appeal has yet to be heard.

During the most recent trial, evidence was heard that Murphy stabbed Ms Dunlea several times in the neck and then set fire to her home before returning to the burning house to give “an Oscar like performance”.

Prosecution counsel, Tom Creed SC told the jury that Murphy came to the scene of the fire and made it look like he was in disarray with his top on backwards and inside out so people would look at him and say “poor Darren”.

However, Murphy, who had only been dating Ms Dunlea for eight weeks, later told gardaí he “snapped” and stabbed Ms Dunlea in the neck before setting her quilt on fire and then lighting a fire in the middle of her kitchen table.

The court heard Ms Dunlea was still alive when Murphy set the fires but was unable to raise the alarm due to the extent of her injuries. Gardaí had to use dental records to identify her after fire fighters recovered her body.

Ann Dunlea said the family found it hugely upsetting to think that Murphy was being given every entitlement while they were still struggling to cope with the loss of their loved one.

“We knew nothing about it (the compassionate leave) but, as you can imagine, we are horrified. We got no goodbyes - we got to say goodbye to Olivia by looking at a framed photo of her on her coffin,” she said.

“All he did from the very beginning was lie. I was outside the house that night and he was there crying, crying crocodile tears. And then to put us through the agony of three trials - he has appealed the last trial and we are in limbo again.

“Then he has the cheek to apply for compassionate release - there is no justice in this country. I would love to sit down with the Minister for Justice and talk about this and what families go through.

“Olivia got absolutely no justice. We are worried for her children and what they have to go through. They live every day without their mother because of him - no one ever knocked on their door to say what their rights are.”

Contacted by The Irish Times regarding Murphy’s release to allow him visit a family grave, a spokesman for The Irish Prison Service said the service does not comment on individual cases.

However it is understood a decision was made by an official at the Operations Directorate of the Irish Prison Service on behalf of the Minister for Justice to allow Murphy visit the grave of family member in Passage West.

Under Section 39 (1) of the Prisons Act 2007, all prisoners are entitled to make an application for an escorted visit to a specific person or place on compassionate grounds.

1 Luke ‘Ming’ Flanagan bares his bottom half to European Parliament
2 Gardaí investigate Dublin Black Lives Matter protest over Covid-19 rule breach
3 Trump turns to bible for photo op as DC burns around him
4 Miriam Lord: Not a bare ankle, hairy knee or a Ming the Trouserless to be seen at Covid committee
5 Over 200 contracted Covid-19 while in hospital for other conditions
Real news has value SUBSCRIBE