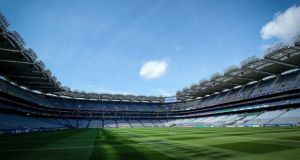 The prospect of double All-Irelands on the same weekend means Dublin City Council has held off on its plans for a homecoming for either or both teams. Photograph: Ipnho

Once more unto the breach – Dublin and Kerry will do battle on Saturday night in the All-Ireland football final replay at Croke Park.

It will be followed on Sunday by the TG4 Ladies All-Ireland final between Dublin and Galway. It is the first time the two senior All-Ireland football finals are being held on the same weekend.

The men’s final is a sellout with all 82,000 tickets snapped up following last Sunday week’s dramatic draw when Kerry confounded expectations by thwarting the much fancied Dubs from winning the five-in-a-row.

The country seems evenly divided on who they want to win on Saturday. A nationwide survey carried out of 1,000 adults reveals that almost the country (49 per cent) watched the drawn game.

A third (33 per cent) want to see Dublin succeed in their drive for five, but 39 per cent will be shouting for Kerry and 28 per cent do not care either way.

Almost half (47 per cent ) of Kerry supporters want Kerry to win solely to prevent the Dubs from making history, according to the survey carried out by Coyne Research.

While the men are going for the five-in-a-row, the Dublin ladies are going for a three-in-a-row and the teams together for a treble-double of senior All-Ireland football successes in the same year.

The prospect of double All-Irelands on the same weekend means Dublin City Council has held off on its plans for a homecoming for either or both teams.

In response to what homecoming the council has organised for the men’s team, it responded: “No announcement will be made in this regard ahead of the final whistle on Saturday.”

Similarly, no plans for the ladies homecoming will be made before the result is known on Sunday.

The council says it will not be opening Smithfield for the match on Saturday evening as it did for the drawn game.

“With the possibility of extra time the event may not finish until 8.30pm or 9pm, by the time the presentations and live coverage finishes. All Ireland Live at Smithfield is a family friendly event but not designed to move to a later darker evening with small children present,” it explained.

There has been talk in the national media about Kerry folk being disgruntled by the throw-in time for Saturday. The 6pm slot was chosen to accommodate RTÉ’s broadcast of the Irish Champion Weekend from the Curragh on Saturday afternoon and the Greyhound derby semi-finals on Saturday night.

Kerry PRO Leona Twiss Uí Bhriain said the late throw-in issue has not been an issue in Kerry.

“Genuinely, nobody has been complaining about it on our social media. We are happy to be in an All-Ireland final regardless of what time it is at,” she said.

“An All-Ireland final is always an occasion especially as before this year, we weren’t at one since 2015. Irrespective of what happens on Saturday, we are proud of this team.”

Irish Rail is putting on extra services for Saturday’s match with the 9.05 train from Tralee going straight to Heuston. There will also be an extra service from Limerick to Dublin Heuston at 12.15pm for Kerry fans based in the north of the country.

There are two extra trains at 9pm and 9.35pm on Saturday night from Dublin Heuston to Tralee.

The Ladies Gaelic Football Association (LFGA) is expecting another record crowd on Sunday.

Pre-sold ticket indicate a crowd of 55,000, breaking the record of 50,141 last year and there might be an even bigger “walk-up” crowd from Dublin supporters looking to see an another double.

However, Sunday’s opponents Galway are also on the cusp of a historic double as the camogie team won the All-Ireland senior championship last weekend.