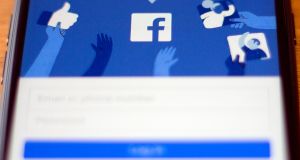 Facebook insists pages on its platform that spread misinformation about vaccinations are being punished by the company reducing the number of people who can see such posts. Photograph: Alastair Pike/AFP/Getty Images.

Facebook insists pages on its platform that spread misinformation about vaccinations are being punished by the company reducing the number of people who can see such posts.

The social media company said it was now promoting science-based content from “authentic” sources such as the World Health Organisation (WHO) when users search for vaccine information on Facebook.

The WHO has declared vaccine hesitancy, including complacency and a lack of confidence and convenience, as one of the 10 main threats to global health this year. The rise in hesitancy, and a fall in vaccine uptake rates, has been largely attributed to an anti-vaccine movement that has grown on social media.

Speaking at the first Global Vaccination Summit in Brussels on Thursday, Jason Hirsch, Facebook’s public policy manager, said the company was taking its role in the area “very seriously”.

Minister fopr Health Simon Harris earlier this week called on companies such as Facebook, Twitter and Google to to consider closing accounts and web pages that share fake information on vaccines.

“These platforms can be a powerful tool for good, or they can be a vehicle for falsehoods and lies, and they need to decide what side they want to be on,” he said.

However, Mr Hirsch said that there was “a series of consequences” facing people who consistently use Facebook to spread hoaxes or claims that have been debunked, such as vaccines being linked to autism.

“If you are a Facebook group, or a Facebook page, who repeatedly posts about this kind of debunked information about vaccinations, we will reduce the distribution of not just those posts but about everything that you post to ensure that we are being appropriately comprehensive and aggressive in trying to reduce the spread of this type of information,” he said.

Facebook also said it would reject advertisements that contain false information about vaccines and would not highlight content from pages that post about vaccine hoaxes to other users.

Maud Sacquet, public policy manager at Mozilla, the company behind the Firefox web browser, said that it was a difficult area to regulate.

“Disinformation is a very complex problem that includes many different areas of tech, policy, piracy, free speech and platform liability. It’s a very, very complicated topic that needs a lot of nuance,” she said.

“We are very engaged with this fight against disinformation. But we still think more needs to be done.”

Ms Sacquet suggested that internet users reduce the amount of personal information they make available online to prevent them from being targeted by untrue information on vaccines.

“We think systematic enforcement of GDPR could actually minimise some of the tracking and help fight against the spreading of misinformation. The more the creator of disinformation knows about you, the more they can tailor the information to you.”

1 Miriam Lord: Minister for Agriculture tries to get himself out of the manure
2 Skeletal remains discovered in south Dublin were of man missing since 2011
3 Coronavirus: One more death and 24 new cases reported in the Republic
4 Martin criticises ‘over-focus’ on Border poll ahead of Foster meeting
5 Barry Cowen tells Dáil he is profoundly sorry for ‘stupid’ drink-driving offence
Real news has value SUBSCRIBE