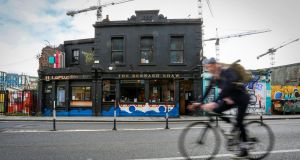 Dublin’s culture and character are being replaced with “homogenous hotels and chain restaurants” and the capital faces a “cultural crisis”, a group of councillors has claimed.

The councillors who are members of the Green Party, Labour, and the Social Democrats have written to Dublin’s Lord Mayor seeking a special council meeting to discuss the issue.

“It’s not only a great pub and venue, but it’s closure is a symbol of Dublin’s cultural crisis. Unique spaces which build Dublin’s culture and character are being replaced with homogenous hotels and chain restaurants,” she said in a statement.

“Dublin’s diverse night culture is being eroded rapidly,” she added.

Bodytonic, which operates the Bernard Shaw, a brewery, festivals and a number of bars and eateries in central Dublin and elsewhere, said on Monday it was with a “heavy heart” it would be closing the pub at the end of October. “We’ve tried really hard over the last few months to renew the lease, stay on longer, or buy the place. A lot of things didn’t go our way over the last 12 months either, but it’s out of our hands now unfortunately,” it said in a statement.

A cross-party request for the special meeting was submitted to Dublin Lord Mayor Paul McAuliffe. The letter reads:

“Dear Lord Mayor, We the undersigned call for a special meeting of Dublin city council. The business of this meeting would be to consider the following motion.

That this council is deeply concerned at the increasing erosion of cultural life and space in Dublin City. Furthermore this council agrees to the following measures to help address this -

We would request that this meeting is held on September 23rd.