Fiona Geraghty (27) ‘will be forever in my memory ...she was loved deeply,’ brother says 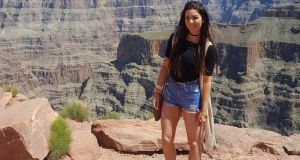 Fiona Geraghty who died in Dubai was ‘lively but calm, strong but gentle, innovative and creative’, her school said

The family of an Irish teacher killed in a Dubai bus crash have said it was “with broken hearts” that they announced her death.

Fiona Geraghty was among 17 people who died in a bus crash in Dubai. The bus from Oman crashed into a warning sign coming off a major highway in Dubai, killing 17 of the passengers on board , authorities said.

The 27-year-old from Balbriggan in Dublin was a teacher at St Molaga’s National School Balbriggan, Co Dublin but was on career break in Dubai .

In a notice on RIP.ie her parents Christopher and Mary and brothers David and Robert said. “Fiona will be very sadly missed by her loving parents, brothers, partner Fiachra, aunts, uncles, cousins and a very wide circle of friends, teachers and pupils of St Molaga’s National School, Balbriggan and School of Research Science, Dubai.”

Her brother David also wrote in a social media post: “Today is the saddest day of my life..... She will be forever in my memory and in my heart as she was loved deeply”.

She was recalled, in a message circulated to parents by her Dublin school, as “an enthusiastic, energetic teacher who always got the best from her students.”

“This is a terrible tragedy for Fiona’s family, our school and our community. We are deeply saddened by the news of her death.”

“Fiona was a much loved member of our staff and will be greatly missed by all who knew her. She was an enthusiastic, energetic teacher who always got the best from her students. She was lively but calm, strong but gentle, innovative and creative in her work and loved by staff and pupils alike,”read the statement.

Psychologists from the National Educational Psychological Service (Neps) are supporting and advising teachers to help pupils in dealing with the incident.

It is understood Ms Geraghty’s partner in his late 20s from Lanesboro, Co Longford, was also injured in the crash. The young man, who moved to Dubai around two years ago, is in a stable condition in hospital. His parents are travelling over to the Middle East currently, according to local sources. A spokeswoman for the Department of Foreign Affairs said they are aware of the man’s case and are providing consular assistance.

The Irish couple had travelled back to Ireland for a social occasion recently, before returning to the United Arab Emirates, one source said.

The bus drove straight into a low-clearance sign in Dubai’s Rashidiya neighbourhood, smashing through the driver’s side of the bus.

The sign hangs over a car-only off-ramp of Sheikh Mohammed bin Zayed Road. Mwasalat, a government-owned bus company in Oman, said the crash involving its Muscat-to-Dubai route. It said it would suspend the service for the immediate future.

It identified the dead as 11 Indians, two Pakistanis, one Irish citizen and an Omani, with two others not immediately identified. Indian consular officials said at least 12 Indians were killed. The Irish embassy in Abu Dhabi said it was aware of reports of the death and was providing consular assistance.

Among the 31 people on board were also citizens of Bangladesh, Germany and the Philippines, the bus company said in a statement. It added that seven passengers remained in hospital, with one in critical condition. Eight others have been discharged. Mwasalat said it would suspend its service to Dubai for the immediate future. It added it was co-operating with investigators in Dubai looking into what caused the crash.

A spokeswoman for the Department of Foreign Affairs confirmed one Irish national, a woman, had died and consular assistance was being provided to the family.