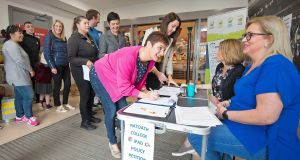 Parents campaigning against an iPads-only policy at a Co Meath secondary school say hundreds have signed a petition calling for a return to schoolbooks.

Ratoath College, a 1,000-pupil school which does not use printed books for junior cycle students, has advised parents to buy iPads – at a cost of €500 or more – for their children ahead of the new school year.

However, dozens of parents attending a meeting this week said their children’s education had been harmed by spending too much time on screens since the policy was introduced in recent years.

Many of those who are refusing to purchase new iPads have been told they face late payment fees of €50 by a third-party technology provider.

The petition is due to be handed to the school’s management body, Louth-Meath Education and Training Board (LMETB), on Monday morning.

The board’s chief executive is due to meet the school principal and senior officials to respond to the matter next week.

The row has turned a spotlight on the role of technology in education at a time when some schools are embracing the use of digital devices, while others are restricting their use.

While there are no official figures on how many schoolchildren are using devices for learning, Wriggle – one of the largest firms supplying iPads to schools – manages up to 40,000 devices for students in more than 100 secondary schools.

However, a department spokesman said use of devices was a decision for individual school boards of management.

The principal of the school, Oonagh Prendergast, declined to comment when contacted on Friday.

In a previous statement, she said she appreciated that the changes were raising concerns for some parents.

However, she said the school was seeking to meet the needs of students emerging into a rapidly changing world and that “21st century skills” such as collaboration, creativity, critical thinking and problem-solving “cannot be taught from a textbook”.

A meeting of about 100 concerned parents this week heard numerous claims that children using the devices were more distracted and had no access to ebooks for certain subjects.

Others were critical of the quality of course content available on the devices and said their children found it more difficult to retain information or take notes using devices.

The group, which has gathered several hundred parents’ signatures at the meeting and at the local Supervalu, calls for parents to be allowed to purchase books instead of iPads.

It also says that where iPads are used in class, it should be under the supervision of teachers.

Fianna Fáil education spokesman Thomas Byrne, who is a local TD, was present at the parents’ meeting this week.

Mr Byrne said that while he was not directly involved in the campaign, he was satisfied there was a substantial number of parents with genuine concerns and requested that the penalty charge for late iPad purchase be suspended.

“I think we need to research this in more detail. There are genuine concerns and I will be looking to have these issues examined by the Oireachtas education committee, so we can hear from educators and experts on this matter,” he said.