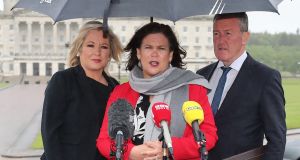 Sinn Fein leader Mary Lou McDonald has said the current political stalemate in Northern Ireland is not acceptable or sustainable.

Ms McDonald said Stormont talks next week aimed at restoring the Northern Executive and Assembly need to be about negotiation, “not just discussion”.

Ms McDonald was speaking ahead of the Sinn Fein Ard Chomhairle in Dublin on Saturday, which will be discussing the outcome of the recent local and European elections and ongoing talks in Northern Ireland.

She said the party had “very difficult” local and European elections but that her leadership is not under threat.

Talks aimed at restoring power-sharing in Northern Ireland will resume on Monday.

“We believe that a deal is possible and our negotiators are engaged fully. We want to act constructively but next week will be the test really as to whether to the two governments and all parties are ready to take leadership, to step forward to resolve the rights issue and to re-establish power sharing and sustainable government,” Ms McDonald said.

“It’s very clear that the current stalemate is not acceptable, it’s not sustainable. There is a way forward, there are answers to these rights issues. We’re determined to land on an agreement. We don’t underestimate for a second the challenge.

“So far constructive conversations, constructive dialogue [have taken place] and now we need something more. Now we need the step change that’s about real negotiation.”

Sinn Fein deputy leader Michelle O’Neill said next week will be “crucial” in restoring the Northern Executive and Assembly.

“The public in the North want the government to work, they want the Assembly and the Executive but they want one that serves them well and actually delivers for them all.

“I think that there’s little public appetite for long drawn out talk processes. The issues are well rehearsed, people know what needs to be resolved.”

Sinn Fein’s former leader Gerry Adams wrote in his weekly blog that the Government has a duty to plan for Irish unity and the demand for a referendum is growing.

“It’s our view that a responsible, forward looking Government prepares now for the prospect, not just of Brexit but of a referendum on Irish unity,” she said.

“The preparations need to start now and we would urge again the Government here to here that call and respond to it in a positive way.”

Ms McDonald also said she believes there will be a Border poll adding “I think it’s a matter of timing”.