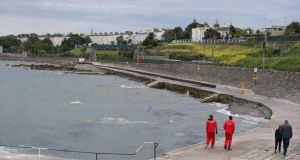 Seapoint is one of the beaches affected by the Dun Laoghaire-Rathdown County Council and Dublin City Council warning to the public not to swim at a number of Dublin beaches because of a sewage leak at Ringsend wastewater treatment plant. Phototgraph: Stephen Collins/Collins

Children under five should not play in sand at Dublin beaches where warnings not to swim are in place this weekend, a specialist in public health medicine at the HSE has said.

Dr Helena Murray said older children should wash their hands immediately after playing in sand and parents should supervise their hand hygiene.

The entire south Dublin coastline has been put off limits to bathers until next Wednesday following a sewage overflow at the Ringsend wastewater treatment plant due to heavy rainfall during the week.

The HSE has advised that aside from bathers, “any organisers of any coastline or water-based leisure or sporting event along the Dún Laoghaire-Rathdown coastline should pay particular attention to this notification”.

Dr Murray said the no-swim warnings should be obeyed as there is a “high risk of illness” for bathers if they are breached. There is a risk of gastrointestinal infections for swimmers, with symptoms including vomiting and diarrhoea, she said.

“If there is visible contamination on sand, people should certainly stay away. I would recommend that very young children, those aged under five, should not play in sand this weekend.

“Older children playing should wash their hands immediately afterwards and parents should supervise their hand hygiene.”

Dublin Kite Festival is due to take place on Dollymount Strand tomorrow. Organisers said extra signage will be assembled, echoing the council’s warnings.

Dr Murray said she “couldn’t see a problem” with the festival taking place, but advised event-goers to bring hand sanitiser and wash their hands afterwards.

Irish Water said sewage overflows at the Ringsend wastewater treatment plant happen around 15 times a year, “but mostly in winter, outside the bathing season, when the rainfall is heavier”. The utility said there was a “storm water overflow” from the plant for two hours over the course of Tuesday and Wednesday.

A spokeswoman said “there is potential” for an overflow to occur again over the summer period if there is “extreme rainfall”.

Sean Laffey, head of asset management at Irish Water said the overflow from the storm water tank “would have been a very highly dilute settled sewage from the networks that came out of the Dublin area”.

Water quality samples were taken at Dollymount, Merrion and Sandymount beaches yesterday and results are expected on Monday.

The Department of Housing, Planning and Local Government said the overflow operated in compliance with regulations, and was “fully screened and settled”.

“It is hoped that the notices can be lifted by the councils pending further sampling results of the bathing waters next week,” a spokeswoman for the department said. “There will be no lasting effects on the bathing water. The tide will wash out the spill and the salt water acts to clean the water.”