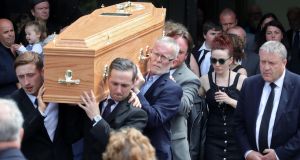 The remains of Karl Shiels are carried from church followed by his partner, Laura Honan. Photograph: Colin Keegan/Collins

Fair City actor Karl Shiels, who died suddenly last Monday aged just 47, “filled his life and lived it to the full”, his funeral Mass has been told.

Addressing a packed Church of Our Lady Mother of the Church in Dublin’s Castleknock on Thursday morning, parish priest Fr Kieran Coghlan said: “What’s important is how we fill that gap between the time we come into this world and the time we leave it.”

He “lived his life and lived it to the full and we have a lot to be thankful for as we gather to remember him here today. Karl has made a difference in the lives of all those he came across and we acknowledged that today in gratitude,” said Fr Coghlan.

Mr Shiels’s partner Laura Honan spoke of all the plans they had. “He burned bright like a comet and in these last few days the explosion of love has been deeply palpable and genuinely unforgettable,” she said.

His stepmother, Irene, read the poem What is Dying? by Bishop Charles Henry Brent. His father, Harry, recalled how Karl was “my eldest son and best pal. Him and I had our moments, I used to say to Laura, how do you put up with him?”

When he told his parents he wanted to be an actor, his father remembered telling him, “I’m not surprised. You were an actor since you were two.” Later, his son studied at the Gaiety School of Acting.

Gifts brought to the altar during Mass included “his much travelled hat”, his Buddha beads “which always brought him peace”, an LP “because of his love of music”, family photos and a book of poems.

Music included Billy Joel’s Lullabye (Goodnight, My Angel), Nick Cave’s Into My Arms, and his Jubilee Street, which was sung as the remains were carried from the church to a standing ovation. They were taken to Newlands Cross Crematorium.

The large attendance included many people outside the church as well as inside it.

From Chapelizod in Dublin, Shiels was best-known for his five years in Fair City, in which he played Robbie Quinn, a shady wheeler-dealer character. Before acting, he was an electrician.

He starred in numerous TV shows, including RTÉ’s The Clinic, Titanic: Blood and Steel, Peaky Blinders and The Tudors.