Bills for exceeding fresh, waste water limits will be €500 a year 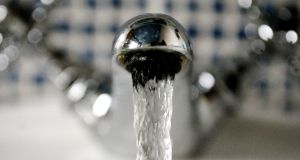 An Irish Water proposal that households would face excessive usage charges of up to €500 for wasting water has been approved by the Commission for Regulation of Utilities (CRU). Photograph: Rui Vieira/PA Wire.

Almost 80,000 households could face an annual charge of up to €500 for excessive use of water under a new charging system approved by the regulator of Irish Water.

The Commission for Regulation of Utilities has sanctioned a proposal by Irish Water to impose a charge of €1.85 on customers for every 1,000 litres consumed above their annual household allowance.

However, households identified as using excessive levels of water will have 12 months to address possible leaks and change their consumption patterns before receiving a bill.

The first bills are not scheduled to be issued until early 2021 and the excess use charges will stay in place until 2024 when the scheme will be reviewed.

The regulator has capped the new charges at €250 each for both water and wastewater usage, meaning a maximum charge of €500 over a 12-month period.

The CRU said that up to 10 per cent of metered households were currently using more than the annual permitted allowance.

Such households account for almost 40 per cent of all domestic water consumption. It is estimated that leaks are responsible for the excessive consumption of water in 60 per cent of these properties.

A domestic household water allowance of 213,000 litres per annum was introduced in 2017. The level equates to 1.7 times the average annual household consumption of water of 125,000 litres.

The annual allowance, which is funded by general taxation, was introduced following the Government’s decision to abolish a general system of water charges after widespread public opposition to the charging regime.

Households with more than four occupants can apply for an additional annual allowance of 25,000 litres per each additional occupant.

Customers with a medical need can apply to Irish Water for an exemption from the charge.

Unmetered households, which are identified as having excessive use will be charged at the €500 cap unless a meter is installed. These households account for 45 per cent of Irish Water’s 1.6 million residential customers. In such cases, Irish Water will identify district meter areas where there appears to be excess use and dispatch crews to determine households which appeared to be using above normal levels of consumption. They would then have either a meter or flow monitoring device installed.

Customers identified as using excessive levels of water will receive a “call to action” from Irish Water which will allow them to identify leaks and potentially avail of the company’s First Fix Free scheme.

An Irish Water spokesman said the first letters advising consumers about their consumption levels were expected to be issued before the end of the year.

If excess use continues, they will then be issued with a notice letter. However, they will only face a charge if the household annual allowance is exceeded in the following 12-month period.

The CRU stressed that the introduction of the charge was “not intended as a revenue raising exercise”.

The regulator also pointed out that Irish Water cannot reduce or cut off a customer’s water supply over the non-payment of charges either temporarily or permanently.

It said the introduction of an excess usage charge was designed to encourage water conservation by customers of Irish Water and to promote personal responsibility for water use as well as, where possible, to identify and fix leaks.

CRU’s director of water and compliance, Laura Brien, said conservation must play a significant part in addressing future resilience of Ireland’s water infrastructure given the increasing demand on water services and greater rainfall variability due to climate change.

“This policy clearly sets out how customers must be treated by Irish Water if excess use is identified and how customers will be given the opportunity to address this in terms of either fixing leaks or adjusting their consumption levels before any charges apply,” said Ms Brien.

The regulator said the Government had noted that clean, usable water required a considerable investment of resources, energy, capital and labour.

“Extreme weather events of 2017 and 2018 brought into focus how precious and vulnerable a resource that water is, notably the two major storm events (Ophelia and Eleanor) along with a prolonged dry spell in summer 2018,” the CRU said.

It added: “These events tested Irish Water’s ability to provide an adequate supply of clean water to the public and highlighted the importance of water conservation.”

The regulator said it regarded the charging system proposed by Irish Water as “an adequate incentive to change behaviour”.

Solidarity TD, Paul Murphy described the new charges as a “very blatant backdoor to full water charges” and a move towards the “commodification of water”.

The Dublin South-West TD expressed concern that the authorities could also alter the proposed charges and household allowance rates without reference to the Dáil.

Mr Murphy warned it could be very easy for some four-person households to consume more than the permitted level and that the charges would be resisted by many consumers.

“I think there will be a real difficulty in imposing these charges given the scale of resistance and opposition to water charges in the past,” he added.

In a submission to the CRU, Sinn Féin said it did not believe charging for excess use would encourage water conservation.

“There is no evidence that Irish people are wilfully wasting water. The focus should be on assisting low income households to source leaks and fix them,” Sinn Féin said.

It also pointed out that, according to Irish Water’s own figures, water consumption in Ireland was among the lowest among OECD countries.

Irish Water said 129 million litres had been saved on a daily basis since the introduction of its First Fix Free scheme with over 6,000 customers having requested a free leak survey up to the end of June 2018 - the latest date for which figures are available.

The company said meters were monitored by drive-by technology without the need for a visual inspection.

An Irish Water spokesman said meters were also monitored for accuracy with a sound alarm activated if they were not working correctly or if they recorded a continuous flow of water. The estimated lifespan of a meter is 10-15 years.