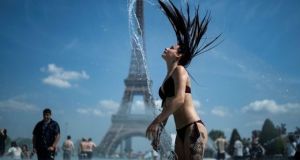 A woman cools off in the fountain of the Trocadero esplanade in Paris on June 25th. Southern France experienced a national record of 45.9 degrees during the heatwave. Photograph: Kenzo Tribouillard/AFP/Getty Images

You wait decades for a record-breaking heatwave and then two come along at once.

A record-breaking heatwave has been forecast for continental Europe next week – less than a month since previous temperature records were broken.

Just three weeks after temperatures reached an all-time high of 45 degrees in France and records were broken for the month of June in countries including Germany and Austria, another week of 40 degree-plus heat is on the cards for next week.

The European Centre for Medium-Range Weather Forecasts indicates that hot air from the tropics and Spain is moving towards western Europe and will settle over the continent next week.

France Météo is provisionally forecasting temperatures of 40 degrees-plus by the middle of next week.

Data from Nasa and the EU’s Copernicus Climate Change Service (C3S) suggest that June was the hottest on record for the month, but July could be the hottest month ever recorded.

Closer to home the really hot air is not likely to reach Ireland, though temperatures will be warmer than normal, with highs of 24 degrees in the early part of next week.

“We are just on the periphery of the warm plume of air,” said Met Éireann forecaster Matthew Martin. “There will be an area of low pressure, so we will see an unsettled period of weather that will be humid and quite warm. There will be rain most days.”

Heavy rain is expected in parts of the country on Friday.

Met Éireann has issued a status yellow rainfall warning for Connacht and counties Cavan, Monaghan, Donegal, Longford and Westmeath for the day, valid from 8am to 8pm.

The forecaster said there was a risk of thundery downpours during this period, along with localised flooding.

It will, however, be humid and warm in most places too.

The weekend will be a mixed bag, but it will still be warmer than normal for the time.

Saturday: Saturday will be the best day of the weekend. A short-lived ridge of high pressure will bring a mostly dry day across the country.

Sunday: Rain will affect the west and north, but it will be warm and sunny in the east and southeast. Stiff breezes will keep the temperature down, but it will still be a balmy 23 degrees. Temperatures will drop lower than 17 to 18 degrees at night.