Political dangers to HSE break-up process many and varied 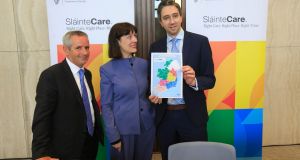 In a confidential memorandum to the Cabinet last year, Minister for Health Simon Harris described the Health Service Executive (HSE) as being “too big to fail and too big to succeed”.

Under proposals announced on Wednesday the Government will begin the process of essentially breaking up the monolithic national health organisation established by Mary Harney almost 15 years ago.

The reforms unveiled by Harris essentially would see most hospital and community services planned and delivered at local level by six regional authorities.

A smaller, central HSE would remain with responsibility for areas such as clinical strategies, quality assurance strategic oversight and financial performance.

That’s a while away yet, though. Over the next 12 months, the HSE and the Department of Health will draw up design plans for how the new structures would operate on the ground with a view to having the regional authorities up and running in 2021.

So it’s all a while away yet. But the new structural reforms are considered to be essential if the overall Sláintecare reform plan for the health service – agreed by politicians in all parties after the last election – is to be implemented.

However, it remains to be seen precisely what roles and powers will be devolved to the new regional authorities and if politicians will be prepared to relinquish control over highly sensitive issues such as the future of key hospital services in their regions.

It seems certain, for example, that the new authorities will not have autonomy over pay for their staff. This will still be determined at national level.

While the regional bodies are likely to be allowed to determine how their staffing arrangements should be configured to meet local needs, a limit on the numbers to be employed is expected to be set centrally.

The political dangers to the process are multiple and varied. But they certainly include the possibility of changes to the status of some hospitals. While there are several examples of how changes to smaller hospitals can work for local communities, there are few if any examples of instances where those changes were introduced without stiff local opposition.

There are no plans for anything like that yet. But as Eddie Molloy, the management consultant who is a member of the Sláintecare Advisory Council, pointed out at Wednesday’s launch, that will be the test of the political consensus that Harris – optimistically – says he is banking on.

“The test,” Molloy said, “will be closing down acute services.”

The second threat to the plan will come from the organised interests currently running the system. Though there was no direct admission of it, it is clear there will be a redundancy programme needed to cater for the people in the management grades and bureaucratic apparatus that will be dismantled and replaced by the new structures.

Privately, senior figures accept this. They also accept it will have to be funded, and that may be expensive.

In 2004, on the eve of the establishment of the HSE, the then government agreed a deal with trade unions that provided guarantees of job security for health service employees. Everyone is keen to avoid this. But they haven’t yet figured out how.

“There will be less management at the end of this,” Harris said. Then he accepted the obvious corollary: “We are going to end up with fewer managers.” You can imagine what the managers will think of that.

There is broad – if not very deep – consensus on many of the proposed Sláintecare reforms. But that is partly because how they are to be achieved has not yet been spelled out.

Worthwhile reforms in the public sector always inconvenience someone because they seek to correct shortcomings and inefficiencies. So will Sláintecare. Yesterday was an important step on the road, necessary but hardly sufficient. There will be more difficult ones.