Provoking a general election would be ‘irresponsible’ – Martin 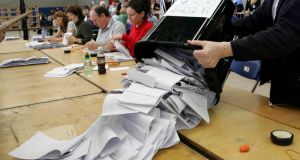 Provoking a general election in the coming months against the backdrop of a potential no-deal Brexit would be a “irresponsible”, Fianna Fáil leader Micheál Martin has said.

Mr Martin also said the next British prime minister must deal with the existing Brexit agreement and said the backstop, the insurance policy to avoid a hard border on the island of Ireland, is needed.

In a briefing on Wednesday to mark the end of the political term, he told reporters: “I think the no-deal scenario opens up such potential economic disruption and is uncertain and cannot be foreseen, despite all of the analysis we’ve had in terms of what will happen, that I think it would be irresponsible to provoke a general election in the next number of months.”

Mr Martin last year said Fianna Fáil will back the passing of another budget, one more than initially envisaged under the confidence and supply seal, because of Brexit. He said at the time he envisaged the election taking place in spring 2020.

He claimed the Government has not adequately prepared for the fallout of a no-deal Brexit but claimed there is a “lot of huffing and puffing” in public.

“I am told the ports are not ready. Dublin Port is not ready for a no-deal Brexit, despite what you hear. I am told by people who know the port... that mayhem will ensue.

“It’s important that if a no-deal Brexit is to occur – it may not – but if it’s to occur all hands need to be on deck to make sure that the people are looked after out there, that jobs are looked after, that livelihoods are looked after and protected insofar as we possibly can. That has to be the essential prerequisite of any political party in the country.”

The two candidates to succeed Theresa May as prime minister and Tory leader, Boris Johnson and Jeremy Hunt, have both said the backstop should be removed from the Brexit withdrawal agreement, which the EU says will not be renegotiated. The winner of the leadership contest will be announced next week.

Mr Martin said he “supports the withdrawal agreement”, noting that “no one has come up with an alternative” to the backstop.

“There should be no premature reaction to the British Tory election and I think there has been to date. People are playing into the hands of the Boris agenda. The British government put forward this idea of a UK-wide backstop and that was accepted and negotiated.”

Mr Martin also called for the creation of a department of higher education and research that would be separate from the Department of Education. His party in government would seek a “broader reconfiguration” of the departments.