Ex-member of Irish military went to Syria in 2015, where she is being held with her child 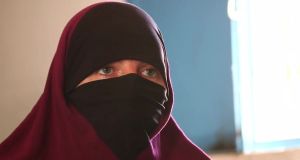 Lisa Smith: ‘You can’t blame me for what the Islamic State done. I don’t hold the same beliefs as them.’ Photograph: BBC

Taoiseach Leo Varadkar has said he would like to see suspected Isis supporter Lisa Smith and her child return to Ireland.

Ms Smith (37) is being held in the Al-Hawl displacement camp in Syria for the wives and children of Islamic State fighters.

Mr Varadkar told RTÉ’s Sean O’Rourke Show said he wanted her child, an Irish citizen, to be able to return to Ireland and he would never separate a mother and child.

Ms Smith moved to Syria, via Tunisia, in 2015 shortly after leaving the Air Corps where she worked as a flight attendant on the Government jet and as a driver to senior officers.

She had also previously served with the Army as part of the 27th Infantry Battalion.

Asked about the difficulties associated with returning Ms Smith to Ireland Mr Varadkar said: “I can’t comment on any military operations, what’s in the papers is not the full story.

“There are three points – we don’t want to put personnel at risk; the cost associated.

“There are lots of Irish citizens who get into trouble around the world, we don’t fly them home from Australia or New Zealand or Egypt as happened with Ibrahim Halawa. There are also security issues should she return. We don’t send out the army to bring home Irish citizens.”

In an interview with RTÉ on Thursday, Ms Smith reiterated that she wants to return to Ireland with her two-year-old daughter.

However, she added: “To be honest I don’t think I will be going back, ever. That’s what I feel. That’s what I think. They could be trying to make an example of me because I’m Irish and I’m military and I’m a woman.

“To be honest I don’t know what’s going on. If it’s just the Irish Government or its Europe as a whole because there’s a big delay on all the countries at the moment.”

The Government rejected a plan from the Defence Forces to bring her home from Syria two months ago through co-operation with foreign intelligence agencies.

The plan, which was drawn up by the Directorate of Military Intelligence, also known as J2, was presented to Minister of State for Defence Paul Kehoe in late April.

It would have involved her being removed from the camp and sent south to the Jordanian border and to safety. However, the Department of Foreign Affairs wants the gardaí instead to bring her home.

Minister for Finance Paschal Donohoe said on Thursday said Ms Smith’s request to return was being assessed. “It is an enormously demanding objective to look at how somebody can be brought safely back from that part of the world and how they can be looked after here in Ireland.

Ms Smith said she is frustrated by the delay in leaving the camp, a frustration she shares with many there.

“Everyone is getting stressed and frustrated because they don’t know what’s happening to them. One minute they are saying deportation and you are going back to your country and people are coming to talk to you, but nothing is happening,” she told reporter Norma Costello.

She again denied being involved in or having any knowledge of atrocities carried out by ISIS and claimed her Tunisian-born husband kept her indoors all the time.

She said: “You can’t blame me for what the Islamic State done. I don’t hold the same beliefs as them. I came to a caliphate where Islam was supposed to be implemented. I have different beliefs than the majority of people.

“People in the Islamic State come from all over the world. They have different beliefs and different understandings of Islam. Since I came here I have seen that no-one has any real understanding of Islam.

“What did I do? I just joined the Islamic State and now I just become a monster. How? The British and the Irish fought for many years. If someone moved from England then what would they say about them? How am I monster? I came here to Islamic State and I didn’t do anything.”

Ms Smith also said that she does not want to be separated from her daughter and therefore she will not send her daughter back to Ireland now. “I love my daughter. What mother is going to give up her daughter like that,” she said.

The head of the Muslim community in Ireland, Shaykh Umar al-Qadri, has said that he does not think Lisa Smith should be free to “roam the streets of Ireland” if she returns to the country.

He told RTE radio’s News at One that he would like to see a very comprehensive investigation take place involving the gardaí and international law enforcement agencies with experience of questioning people who have been radicalised.