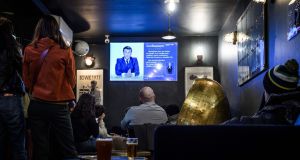 In French president Emmanuel Macron’s televised address to the nation, he said: ‘The virus is circulating in France at a speed that even the most pessimistic had not anticipated.’ Photograph: Philippe Lopez/ AFP via Getty

Countries around Europe have enforced restrictive measures as a surge of Covid-19 cases led to widespread disruption around the continent, amid warnings that inaction could lead to “millions” of deaths.

Germany, where cases have reached 15,000 per day, shut bars and restaurants for a month while, with more than 3,000 in intensive care, French president Emmanuel Macron instituted a second national lockdown for at least the whole of November.

“The virus is circulating in France at a speed that even the most pessimistic had not anticipated,” Mr Macron said in a televised address. France has recorded 254,000 new cases of Covid-19 in the week leading up to this Monday.

In the Netherlands, a “partial lockdown” was extended into December as cases rose past 10,000 a day.

At a joint press conference with European Commission president Ursula von der Leyen, renowned virologist and Covid-19 adviser Peter Piot warned that millions of people would die if the virus was allowed to roam freely in society.

“We need to act fast, we should not waste our time, and we should certainly not wait until people start dying in great numbers because that follows about three to four weeks after there is a surge in infections, and that is as sure as night follows day,” Dr Piot told reporters.

If allowed to spread freely, “the toll in deaths will be enormous”, Dr Piot said. “Millions of people will die. And I think in the 21st century, I don’t think that’s something we can ethically accept.”

Ms Von der Leyen acknowledged that “obviously the exit strategies were partly too fast and measures were relaxed too soon”.

In Ireland, a document published on the website of the Health Service Executive (HSE) warned that it was awaiting a “crucial” sanction from the Department of Health in order to resume “full-scale” purchases of personal protective equipment (PPE).

However, it said “sanction is awaited from the Department of Health to resume full-scale sourcing/purchasing activities.

This is critical to ensure continued availability of PPE stock to meet current needs and have the necessary buffer stocks in place to the end of 2020,” the document reads.

The document shows that, based on forecast levels and expected supply, stocks of some PPE may run down to several days’ supply by the end of November.

However, this was based on “worst case scenario” rather than actual demand, which was likely to be lower, the HSE said, with shortages not envisaged.

A spokeswoman said the engagement with the department was part of its governance arrangements, and that sanctioning of purchases was undertaken on an “iterative basis”.

“We are working very closely with our colleagues in [the Department of Health] to finalise the remainder of our inventory needs for 2020.”

The Department of Health said it was working with the HSE to finalise orders for the rest of 2020, and that €650 million was approved for PPE purchases in the budget.

“The department remains satisfied that the requirements for PPE are adequately resourced in 2020 and going forward for 2021.” The document was removed from the HSE website on Wednesday afternoon.

The Department of Health confirmed another 675 cases of the virus in Ireland, as numbers diagnosed continued to trend downwards. A further six deaths were reported, bringing the total to 1,896 in the Republic, and 59,434 cases.