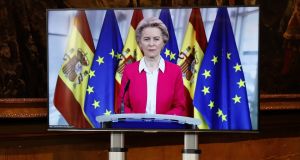 A resurgence of coronavirus that is overwhelming hospitals and filling intensive care units across Europe is due to an over-hasty return to normality over the summer, and failure to implement control measures while infections were low, top EU figures have warned.

At a joint press conference with European Commission president Ursula von der Leyen, leading virologist and Covid-19 adviser Peter Piot warned that millions of people would die if the virus was allowed to roam freely in society.

“We need to act fast, we should not waste our time, and we should certainly not wait until people start dying in great numbers because that follows about three to four weeks after there is a surge in infections, and that is as sure as night follows day,” Dr Piot told reporters.

If the virus was allowed to spread freely, “the toll in deaths will be enormous”, Dr Piot said. “Millions of people will die. And I think in the 21st century, I don’t think that’s something we can ethically accept.”

The warning comes amid a dramatic rise in infections, with 1.1 million new cases registered in Europe last week alone. An average of 1,000 Europeans died of the virus each day last week, which was a rise of a third compared with the week before.

The European Commission has appealed to governments to share data on how many intensive care beds they have unoccupied, so that patients can be moved across borders out of countries where space has run out.

“The situation is very serious and it risks to get worse if we don’t take more urgent and drastic measures,” Dr Piot warned. “The numbers are really staggering.”

Dr von der Leyen, who oversaw an effort to re-start the summer travel and tourism season in Europe over the summer to help the struggling sector, acknowledged that the resurgence showed that countries had reopened too fast.

“Obviously the exit strategies were partly too fast and measures were relaxed too soon,” she said. In addition, countries had not done enough to put control measures such as adequate testing and tracing in place while infections were at a lower level.

“I think in the summer we should probably have done more. You prepare the roof when the sun shines,” Dr Piot said.

The virologist cited research showing that places that were hit worst by the virus also suffered the worst economic damage, while countries that controlled the spread saw a lesser economic impact.

“It’s not about public health versus the economy,” Dr Piot said. “We really need to fix the health issue in order to make sure the economy can restart.”

The EU has sponsored the development of multiple vaccines and, in a “best-case scenario”, could start rolling out doses in April if trials are successful, according to Dr von der Leyen.

But she warned that early versions of vaccines often did not provide total immunity, but protection of 70 per cent or lower. Immunity can also wear off after time. “One year, five years, lifelong? We don’t know,” Dr Piot said.

“The vaccine is not a miraculous event that changes everything from one day to the next,” Dr von der Leyen warned. “This Christmas will be a different Christmas.”