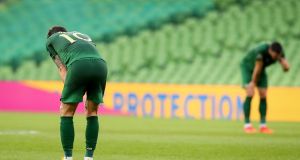 Republic of Ireland’s Robbie Brady after Ireland’s loss to Finland in September. Research demonstrates that a team losing can have a negative effect on mood sometimes that last many days and even weeks. Photograph: Ryan Byrne/Inpho

Like everybody else I have had to listen to one sporting grandee after another tell me about the value of watching team sports. I appreciate that people want to advocate for their sport. It is understandable. But let’s be very clear: watching team sport has no lasting positive effects on mental health and can in fact be very damaging to both mental and physical health.

Lets look at what we know. There are two important factors that can combat poor mood and depression. First, exercise is particularly relevant. Many studies have shown that participation in exercise can improve mood. It is as useful as anti-depressants for many and even those with moderate clinical depression. Make no mistake I am a sport and exercise advocate. I, like many others have struggled with managing the ups and downs of life over the years. Exercise is a life line.

But it is doing exercise, not watching it, that affords the protection to our mental health.

However, sport may help in other ways for those struggling with their mental health. Retaining a sense of connection to others is now considered a key indicator of morbidity and mortality. Indeed the value of social connections and belonging for mental and physical health is now such a stable phenomenon it has it is often referred to as “the social cure”.

And exercise and access to social connections are often synergistic. Participation in sport and exercise is bound up in our connections with others. Even for those who attend a local yoga class, gym or run with friends the time to connect with others can be as important as the exercise itself. This is bolstered by the particularly strong traditions of fraternity in some sports as is often the case in team sports.

We all know die-hard soccer, GAA and rugby fans. Loyalties such as these can also give a sense of connection to others, even when we are not co-present. So in times of isolation and as the new restrictions prevail, perhaps they can offer well rehearsed health benefits associated with the social cure?

Well unfortunately, these strong connections can also be damaging. Remember teams both win and lose. Spectators can be negatively as well as positively affected when watching sports on television. Research demonstrates that a team losing can have a negative effect on mood sometimes that lasts many days and even weeks.

More worryingly, strong group ties, such as those felt by sports fans, can actually act as a “social curse”. For example, there is the long-time association between alcohol consumption and spectator sport. Available research suggests that those who identify most strongly with their teams are those most likely to overconsume alcohol, win, lose or draw.

Equally as worrying in terms of mental health is that betting on a game while watching is now possible. In-play betting has raised many concerns among responsible gambling advocates due to its demonstrable relationship with problem gambling behaviour.

Sporting organisations themselves acknowledge these concerns about the increasingly widespread evidence of addictive behaviour among fans. And proper order too. Leaders of these organisations, should be concerned: loyal fans are at particular risk of gambling losses.

They tend to overestimate their team’s ability to win. And equally those consuming alcohol during the match – the loyal base again – are also at increased risk of making impulsive and risky bets. So those negative mood effects of sporting losses can be amplified by both misuse of alcohol and gambling losses. In short, for far too many, watching team sport has substantive negative mental health consequences.

In this country as is the case in many others, strong sporting loyalties are built on strong connections to county or place. Sporting identities can become embodied in a small group of people or individuals who see themselves as guardians and sponsors of the sport, its associated rituals, and facilities. Indicative of this we have been told on TV and radio, on more than one occasion, that the continuance of GAA, racing and rugby fixtures will lift the mood of the nation.

This leadership group has come to truly believe that they speak for “all of us”. I want to be quite clear, there are many of us for whom you do not speak. Watching sport might positively effect the mood of some of those who care about and follow these sports. But it comes at a price in a pandemic. And it is a price that will be paid by vulnerable loyal young fans who struggle with alcohol and gambling.

Orla Muldoon is Professor of Psychology at University of Limerick