The National Lottery office have confirmed that the winning EuroMillions ticket worth €88,587,275 was sold at the Applegreen Motorway Services station on the M1 Northbound in Lusk, Co.Dublin. Video: Bryan O'Brien 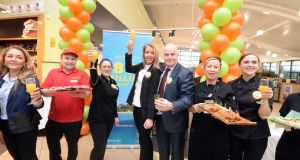 There was still a sense of disbelief from excited staff and customers at the Applegreen service station in Lusk, north Dublin, yesterday as they celebrated the news the shop had sold the €88.5 million EuroMillions jackpot ticket.

Rumours had been rife for two days that it was a family shop in Co Cork that sold the winning ticket for Tuesday’s draw to a syndicate of 34 pharmaceutical company workers.

But their hopes were dashed on Thursday night when the National Lottery confirmed it was a Dublin agent that sold the ticket.

Joe Barrett, chief operations officer and co-founder Applegreen, said the store found out it had sold the ticket on Thursday night but had to keep the news “under wraps” until Friday morning.

The motorway services station, located on the M1 northbound, decided to drop its fuel prices to 88.5 cent a litre on Friday for a limited time to mark the jackpot.

Queues built up quickly at the store and were backed up as far as a nearby roundabout. Staff gave pastries to motorists as they waited to take advantage of the special offer. Mr Barrett said celebrations livened up a “dull wet January day”.

“There’s huge excitement and a great buzz here,” he said. “The Lottery wanted to give us champagne but we said no, we can’t here on the motorway sites.”

Mystery still surrounds the identity of the ticketholder and lottery representatives have been tight-lipped about the details.

Niall Andrews from the National Lottery said it would be Wednesday when the jackpot money arrived into Dublin. “Our winners have been in touch. I don’t know [about their identities]. We’ll have more information next week,” he said.

“This is a substantial win, the biggest of the three in the last 12 months. We’re known as the lucky Irish throughout the European community.”

Michael Feeney, site director at Applegreen, said: “It’s only just come out the blue really. We’re having fun with it.”

Back in Co Cork, the reality of not being the store that sold the winning ticket did not stop the champagne flowing at Fitzpatrick’s newsagents in Glounthaune. A local radio station sent the bottles despiterumours being proved unfounded.

Shop manager Kerri O’Neill said staff had been taken aback by the publicity. “It is such a pity, though, that Cork doesn’t have 30 new millionaires.”