Transatlantic tango: Trump and May look to forge ‘special relationship’

Britain's prime minister Theresa May tells Republican lawmakers in Philadelphia that she looks forward to drafting a trade agreement with the United States and hopes to "renew the special relationship" between the two countries. Video: Reuters 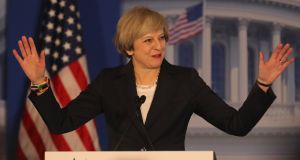 Continuing an age-old dance between UK prime minister and US president, Theresa May will on Friday become the first foreign leader to visit Donald Trump at the White House. Photograph: Christopher Furlong/Getty Images.

Sir Kim Darroch, British ambassador to the US, rarely misses an opportunity to point out that Donald Trump regards the meeting of minds between Ronald Reagan and Margaret Thatcher as a model for the president’s own relationship with Theresa May.

Continuing an age-old dance between prime minister and president, Ms May will on Friday become the first foreign leader to visit Mr Trump at the White House. While the president has declared his intent to put “America first” in all things, London scents an opening with a man whose mother was British and who restored a bust of Winston Churchill to the Oval Office within hours of moving in.

It was Churchill, born to an American, who coined the phrase “special relationship” (as well as “iron curtain”) during a lecture tour of the US after the second World War. The affinity has been publicly reaffirmed by both sides ever since but proved notoriously lopsided as the US surged to superpower status and Britain faded into the second rank. While most US presidents are instantly recognisable to the British, few prime ministers have left their mark across the pond.

“There is something faintly demeaning about these prime ministerial jaunts to Washington,” journalist Andrew Marr wrote in the Independent in 1994.

“No Briton with a residual flicker of patriotism can be entirely happy at our doglike desperation to be noticed, to receive a few kind words, have a stick thrown, be reassured by the Nice Man in the Big House that we are still more valuable than the other mutts in town.”

Personalities, and personal chemistry, have been part of the narrative, at least symbolically. Churchill and Franklin D Roosevelt (FDR) were wartime allies against Hitler. On one occasion at the White House, a naked Churchill opened his door to Roosevelt and said, “You see, Mr President, I have nothing to hide from you.” Both men laughed.

Relations turned sour in the 1950s when Anthony Eden authorised military action in Egypt to regain control of the Suez canal, taking Dwight Eisenhower by surprise. Trump adviser Thomas Stewart, a former US naval officer, said: “Eden kept Eisenhower in the dark. That damaged relations and affected communications between the UK and US for quite a while. Eden and the Americans were wounded by the lack of trust.”

The surprising friendship between Conservative Harold Macmillan and the much younger Democrat John F Kennedy is the subject of a book, Harold and Jack, by Christopher Sandford.

“The two leaders had exchanged not only formal messages but also a steady flow of handwritten notes, Christmas and birthday cards, congratulations, and, on occasion, condolences,” the author records.

Macmillan also had an American mother and his wife was the aunt of Lord Hartington, killed in action in 1944 shortly after he married JFK’s sister Kathleen. It was Macmillan who said of the British and Americans: “We are the Greeks to their Romans.” 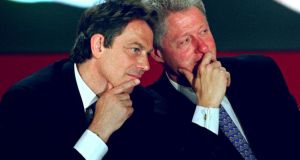 In pictures: US presidents and British prime ministers

The British prime minister resisted pressure to send troops to Vietnam, unlike Tony Blair in Iraq a generation later. After one call, he said: “Lyndon Johnson is begging me even to send a bagpipe band to Vietnam.”

The 1970s brought Heath/ Nixon and Callaghan/ Carter, but it was the years 1981-89 that delivered the ideological soulmates Thatcher, a Conservative, and Reagan, a Republican, both for the free market, against big government and devoutly anti-communist. They rode horses and golf buggies together.

Thatcher once declared: “Your problems, will be as our problems, and when you look for friends we shall be there.”

She was, however, critical of Reagan over the US invasion of Grenada. Stewart recalled how Thatcher visited towards the end of Reagan’s presidency, when he was under pressure over the Iran-Contra affair, and gave an interview that strongly praised him. “As she was leaving, at the airport, Reagan gave her a call and said, ‘Margaret, thank you.’ All the cabinet members gave her applause of appreciation.”

Stewart, who met Thatcher, added: “She was a rock solid individual. She understood it was a force multiplier having the UK and US together and it really was a special relationship. We were able to face down the Soviet empire to the extent that they changed who they were.”

The inversion of Thatcher/ Reagan came in the 1990s with Tony Blair of Labour and Bill Clinton of the Democrats, both of whom grew up in the post-war era and studied at Oxford University.

Clinton’s New Democrats were hugely influential on Tony Blair’s New Labour with youth, a shiny rebranding and a shift to the political centre ground. Sidney Blumenthal, a former assistant and senior adviser to Clinton, introduced him to Blair before he became prime minister.

“It was probably the closest relationship of an American president and a British prime minister devoted to a common purpose, even more so than FDR and Churchill,” he said. “They of course were partners in the defeat of Nazi Germany but FDR was not devoted to the future of the British empire. He came to distrust Churchill as a military strategist and overrode him.

“When Bill Clinton emerged he was the sole political leader of his kind in the west and when Blair became prime minister, there was a kind of movement. They had to establish liberal and progressive politics as best they could while having to contend with Reaganism and Thatcherism. What happened has been overshadowed and discoloured by Blair and Bush.”

This was an unlikelier coupling. Not long after his inauguration in 2001, George W Bush invited the prime minister to a retreat at Camp David. At a press conference, the two leaders were asked if they had found any common ground.

“Well, we both use Colgate toothpaste,”

Bush joked. Blair shot back: “They are going to wonder how you know that George.”

Blair was criticised as “Bush’s poodle” after throwing in his lot with the disastrous US military invasion of Iraq. When Bush presented Blair with the Presidential Medal of Freedom in January 2009, one headline dubbed it a “medal of dishonour”.

Then came Gordon Brown and Barack Obama. Once again, the unrequited neediness of Britain was on display. In 2009, Brown tried five times to arrange a meeting with Obama on the fringes of the UN general assembly in September 2009, only to be granted a “snatched conversation” in a New York kitchen.

The removal of Jacob Epstein’s bust of Churchill was seen by some as evidence of Obama’s antipathy towards the UK, although British officials said it had simply been on loan as a personal gift from Blair to Bush for the duration of his presidency and was always expected to then be returned.

Obama had a stronger relationship with Germany’s Angela Merkel than with his British counterparts. She received his final phone call to a foreign leader from the White House, a telling contrast from May being the first to meet Trump. The pendulum swings again.

Luke Coffey, director of the Foreign Policy Center at the Washington-based Heritage Foundation think tank - which contains a Margaret Thatcher Centre for Freedom - said: “I’m optimistic about this relationship. You’ve got someone who’s not going to be down on the prime minister over the Brexit issue and who wants to do a trade deal.”

Coffey, former special adviser to Britain’s ex-defence secretary Liam Fox, added: “The important point about the special relationship is it shouldn’t matter who’s in 1600 Pennsylvania Avenue or Number 10 Downing Street. It has to rise above the personalities and the political parties.

“A lot have a very romantic idea of the special relationship, especially from a UK perspective. It’s first and foremost about military and intelligence cooperation. When you add on other conditions then perhaps it’s not seen as special as people would like.”