Campaigners to hand in petition to save Guinness bridge 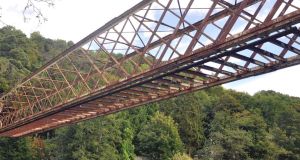 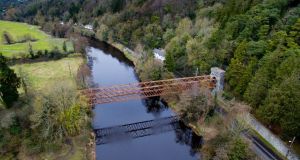 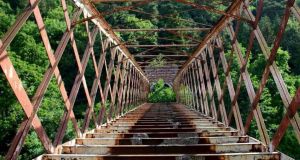 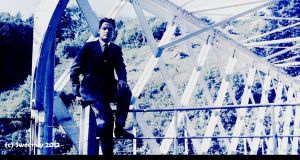 Campaigners hoping to save a 19th-century bridge built by the Guinness family will hand a petition to members of South Dublin and Fingal county councils on Friday.

About 2,500 individuals have signed the petition calling for the cast-iron Farmleigh Bridge, which spans the Liffey between the South Dublin and Fingal administrative areas, to be restored.

The 52m box truss bridge was built between 1872 and 1880 by Edward Cecil Guinness. It links the south side fields of Waterstown Park in Palmerstown to a tunnel connecting to the Farmleigh estate in the Phoenix Park.

Guinness built the bridge, also known as Silver Bridge, to supply electricity for Farmleigh House. It also brought water to the Farmleigh clock tower and provided access to the Farmleigh estate for many of its workers who lived on the south side of the Liffey in Palmerstown.

Campaigners say the bridge was closed in the 1970s and is now rusting and in a state of disrepair. They say it requires maintenance “to bring it back to its original grandeur” and it is at risk of collapsing into the Liffey if the rivets in the lattice structure are not replaced.

“It could serve as an access point for pedestrians to the Phoenix Park from Lucan and Palmerstown residents,” the Rebuild Silver Bridge group said. “It could also be used as an alternative route as part of the Liffey greenway plan.”

Campaigner Paul Corcoran said it was important to save the bridge because of its historical association with the Guinness family. But he also said restoring it would open up connectivity between Phoenix and Waterstown parks, adding that it could be used as part of walking, fishing or cycling routes.

Mr Corcoran said an engineering report on the bridge was carried out about 10 years ago and that a new survey and repair work could cost in the region of €300,000. But he said all bridges over the Liffey undergo regular surveys so it would be feasible to add one more bridge to the list.

In November, South Dublin County Council said the bridge was a protected structure in the ownership of Fingal County Council and that “substantial costs” would be involved in restoration work.

However, the council added that Fingal had said it would examine the possibility of progressing the project and that “South Dublin County Council will support this including through progressing a joint application for funding from Government for the repair and restoration works as required”.

Restrictions on Kildare, Laois, Offaly could be extended to other counties, NPHET warns 09:40
DoneDeal suspends adverts for sale of dogs after spate of dog thefts 06:00
Half of people in direct provision ‘unable’ to social distance 04:05
Urban congestion charges under consideration 04:05
Conspiracy theories ‘may hamper’ roll-out of 5G 03:56

1 Midlands lockdown: ‘Why shut down Offaly and leave Dublin open?’
2 Sand-hued cyclepaths changing the face of south Dublin coast
3 Restrictions on Kildare, Laois, Offaly could be extended to other counties, NPHET warns
4 Meat plant clusters may be down to softly-softly approach
5 Midlands lockdown: Movement restrictions in place for residents of Kildare, Laois and Offaly
Real news has value SUBSCRIBE