Push back from Mexico continues after Donald Trump floated out plans to fund his border wall with a 20 per cent tax on goods from south of the border. Video: Reuters 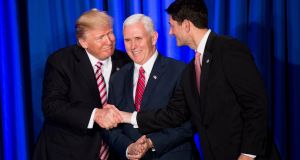 US president Donald Trump became embroiled in a diplomatic spat on just his sixth full day in office after Mexico’s president cancelled a meeting with him over his plans to build a border wall between the countries.

A day after Mr Trump insisted Mexico would pay for the multi-billion dollar barrier, Mexican president Enrique Peña Nieto cancelled their meeting scheduled for next Tuesday in response to the US president’s tweets that they should call off their summit over Mexico’s refusal to fund it.

White House press secretary Sean Spicer said last night Mr Trump would force Mexico to pay by imposing a 20 per cent tax on all imports from the country, a move that has the potential to start a trade war between the US and Mexico.

Speaking at a three-day Republican retreat in Philadelphia, Mr Trump suggested the meeting was cancelled by mutual agreement when in fact Mr Peña Nieto announced the decision while the US president was en route to Pennsylvania.

Senate Republicans said they planned to move ahead with the construction of the wall at a cost of between $12 billion and $15 billion (€11 billion-€14 billion), an expense Mr Trump insisted would not fall to the US taxpayer.

On Wednesday, Mr Trump announced presidential orders to crack down on illegal immigrants and start building the wall “in months”.

In a video address to the Mexican people on Wednesday night, Mr Peña Nieto said he regretted and condemned the decision. “I have said it time and again: Mexico will not pay for any wall.”

The U.S. has a 60 billion dollar trade deficit with Mexico. It has been a one-sided deal from the beginning of NAFTA with massive numbers...

of jobs and companies lost. If Mexico is unwilling to pay for the badly needed wall, then it would be better to cancel the upcoming meeting.

Mr Trump’s decision to act on his contentious promises targeting illegal immigrants in the US, along with his expected orders to suspend a US programme to accept Syrian refugees and curb immigration from predominantly Muslim countries, have sent shock waves around the world.

Taoiseach Enda Kenny told reporters in Dublin he did not believe undocumented Irish immigrants living in the US would fall victim to Mr Trump’s plans.

Mr Kenny said that he trusted the president and his “big heart”, but said he would raise concerns about the plight of Irish immigrants when the two meet in Washington on St Patrick’s Day. He hoped Mr Trump would clarify that minor indiscretions were not issues that would warrant drastic action.

“If I follow on from what he said before, I trust that in his clarification here that the Irish will not be affected by that,” Mr Kenny said.

Mr Kenny pointed out that illegal Irish living in America, estimated by the Government to number about 50,000 although the exact figure is unknown, contribute strongly to the US economy.

Mayors of so-called sanctuary cities, where undocumented immigrants are protected from national laws, reacted angrily to Mr Trump’s plan to pull federal funding if they fail to comply with his plans.

Boston mayor Marty Walsh, whose parents come from Co Galway, said he would even allow people to take up residence inside City Hall to “shelter and protect anyone who’s targeted unjustly.”

“To anyone who feels threatened today, or vulnerable, you are safe in Boston,” he said.

Meanwhile, British prime minister Theresa May told Republicans in Philadelphia that the US and the UK could not return to “the failed policies of the past” by intervening militarily in foreign countries.

Speaking ahead of her first meeting with Mr Trump at the White House today, Ms May drew a line under the foreign interventions of the Bush-Blair era. However, she urged Americans not to withdraw from the world or multilateral institutions.

“The days of Britain and America intervening in sovereign countries in an attempt to remake the world in our own image are over but nor can we afford to stand idly by when the threat is real and when it is in our own interests to intervene.”