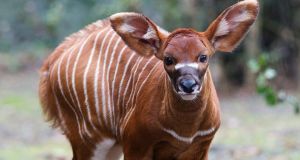 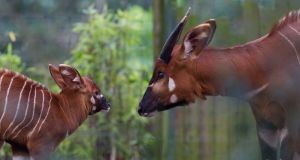 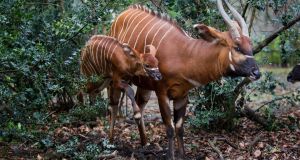 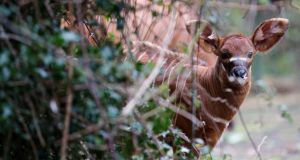 There are fewer than 140 eastern bongos in the wild. Photograph: Patrick Bolger/Dublin Zoo/PA Wire

Dublin Zoo has welcomed the arrival of a new bongo calf, adding to its herd of the critically endangered species of antelope.

The 15kg eastern bongo was born on January 5th and brings the herd number to five.

The gender of the calf has not been confirmed yet as a zoo spokesman said the new-borns tended to be quite shy and its natural instinct was to take cover to protect itself.

Eastern bongos, who can now only be found in one remote area of Kenya, typically have large ears that help them to hear predators in the wild.

They are distinctively-marked and among the largest of the African forest dwelling antelope.

A spokesman said 75-140 eastern bongos exist in the wild and the population was in “rapid decline”, as they are commonly hunted for their horns and meat.

The International Union for Conservation of Nature (IUCN) has classified bongos as endangered.

“The calf has been well-received by its mother and grandmother Kimba has also taken a shine to the family’s latest addition,” she said.

“We’re pleased to see the new arrival is feeding well and has adapted seamlessly to its newfound surroundings.”