Sinn Féin President Gerry Adams has suggested that the “cash for ash” controversy in the North will have to be settled before a power-sharing executive can be set up after the assembly elections on March 2nd. 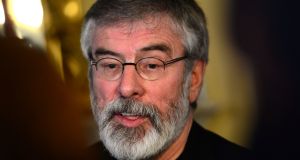 Gerry Adams: The cash for ash row is “a standalone issue which is above and beyond whatever programme we put together to proceed with . . . That has to be sorted.” Photograph: Dara Mac Dónaill

Sinn Féin president Gerry Adams has suggested the “cash for ash” controversy in the North will have to be settled before a powersharing executive can be set up after the assembly elections on March 2nd.

Repeatedly describing the renewable heat incentive scandal as a “standalone issue”, Adams says it could not be “parked”.

“It’s a standalone issue which is above and beyond whatever programme we put together to proceed with . . . That has to be sorted. It’s in the process of being sorted now. It’s not subject to negotiation. Or anything else. It needs to be dealt with. The confidence needs to be restored. And then we’ll proceed.”

His comments will exacerbate pessimism in the two governments that it may not be possible to resuscitate the Northern Executive immediately after the elections.

Adams rejected the idea that Sinn Féin seized the opportunity afforded by the cash for ash scheme to collapse the Executive because it suited its broader political purposes of responding to grassroots disenchantment with the DUP, managing the transition to the post-McGuinness era and reorienting its political strategy in both parts of the island. “No, that is the only reason why they were called. All the other issues which were the backcloth to this we could have dealt with.”

He dismissed the idea the election is related to the Sinn Féin succession. Nobody expected, he says, that Martin McGuinness would be struck with a life-threatening illness.

McGuinness’s retirement accelerated the succession to the next generation of Sinn Féin leadership in the North. “We discussed all sorts of folks who could have filled that position and we came down on Michelle O’Neill.”

He spoke repeatedly about how “we” made the decision to promote Ms O’Neill. But he declines invitations to explain exactly who “we” are, and what exactly the process was.

It clearly was not an internal leadership election, but a decision arrived at by a small group. “There might be 50 or 60 people in our collective leadership,” Adams says.

The rest of the succession plan is ongoing, according to Adams. The party is engaged in a process of internal “reorganisation, regeneration”, of which the future transition of the leadership is only a part. But the leadership – and particularly, his own retirement – has become such a constant subject that he jokes about giving The Irish Times a scoop on a date. However he does not.

“It’s all a matter of timing. And it’s very important that we keep that to ourselves.”

Adams accepts that the way Sinn Féin does its business is very different to the other parties which “fracture” and lose their cohesion. “We don’t have that,” he adds.

Earlier this week, Mary Lou McDonald told The Irish Times Inside Politics Podcast that Sinn Féin should have “a conversation” about joining a Fine Gael or Fianna Fáil-led government, something the party ruled out before the last election.

Previously the party had insisted it would only join a left-led government. Is this a recasting of the party’s political strategy in the South?

“I have to say, I never really subscribed to that notion of a left-wing government, certainly not in the short-term. I mean, who are the left?”

This looks a lot like a shift in political strategy.

“The party’s position is that any decision to go into government is an ardfheis decision,” Adams says.

Sinn Féin ardfheiseanna, he adds, are exciting events, with nobody really knowing what way the big decisions will go. This has not really been the experience, though.

Most independent observers would say the leadership decides a position and then the ardfheis tends to row in behind it. Not always, but usually.

Certainly, that appeared to be what happened the last time the party considered the question of participation in government, in Derry in 2015.

“But sure if you wanted you could just go back to another ardfheis and ask them to overrule that. You give the leadership too much credit in these issues.”

Isn’t the party further away than ever from government in the South?

So what is the path to government?

Will he go to the White House?

Sinn Féin, he says, repudiates the views and comments of US president Donald Trump. Then he adds: “In principle, if we were invited, yes.”