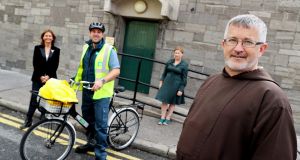 The postman on his bike is a well-loved image, but, in a sign of changing times, An Post is now giving away its old bicycles.

Letters have been largely replaced by emails, and a growing part of the job is delivering parcels and packages bought online, meaning electric three-wheeled bicycles and electric vans make life far easier for those doing the rounds.

Conor Farrelly, who has cycled his Pashley Pronto bike around the roads of Ballsbridge for the last five years, said he will miss his “tank”.

“They were very sturdy for the kind of job were were doing,” he said. “It’s hard to come around the realisation that you won’t be cycling the bike anymore. I’m worried I’ll start piling on the pounds.”

He says bicycles are “part and parcel of being a postman – no pun intended, but it was starting to get more difficult with all the parcels”. He will now drive an e-van which will do 120km on a single charge.

An Post is giving away more than 200 of its old bicycles to frontline staff working in homeless charities.

With the Government urging people not to use public transport unless absolutely necessary during the pandemic, it is hoped the bicycles will allow charity workers to navigate through cities and towns.

The first batch of refurbished bikes were presented to Dublin Simon and the Capuchin Centre on Thursday. Others will be delivered to charities supporting homeless people or those living in temporary accommodation such as Good Shepherd in Cork, COPE in Galway, Focus Ireland and Peter McVerry Trust in the weeks and months ahead.

Most of them are Pashley Prontos like Mr Farrelly’s “tank”, which have been the workhorse of An Post’s fleet for many years and can carry 20kg on both the front and rear. They were built to endure the strains of consistent heavy use.

Capuchin Day Centre co-director Fr Seán Donohoe said it provides food parcels to as many as 1,400 people in Dublin, and the bicycles will allow the speedy delivery of these.

Dublin Simon chief executive Sam McGuinness said the donated bikes would help the charity to stay connected with the people it helps.

An Post deliveries in Dublin city centre are all made by zero-emission electric vehicles. Cork, Waterford, Limerick, Kilkenny, Galway and other large towns will all have emission-free deliveries by the end of the year.