Face masks should be promoted as form of personal expression – report 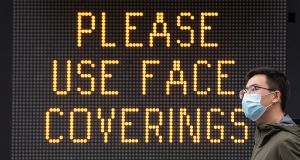 The wearing of face masks should be promoted as a social practice and form of expression rather than purely as a medical intervention to reduce the spread of Covid-19, researchers from the University of Oxford have said.

A new study published today in the British Medical Journal says campaigns aimed at encouraging people to wear masks during the pandemic should promote face coverings as a means of personal expression and a way to express one’s cultural background and interests to improve uptake and usage.

Authors of the study say people are more likely to wear masks in public if they’re encouraged to wear a covering that is “meaningful to them” and that is ground in the “social and cultural reality” of their community.

Helene-Mari van der Westhuizen from the Nuffield department of primary care health sciences at the University of Oxford warned that “protracted debates” about whether people should wear face masks as a medical intervention had “delayed implementation of a valuable tool”.

Campaigns calling for the wearing of masks, particularly in countries where there is no cultural tradition of face coverings, should be grounded in the “social and cultural practices and realities of affected communities”, she said. “Campaigns should not only inform, but also work to shape new sociocultural norms,” she added.

When framed in this light, masks can be seen more as a piece of clothing or accessory rather than purely as an implement to curb the spread of the virus, says the study. The symbolism of a face covering within a particular society is also influenced by social expectations such as what we expect a shop assistant or a bus driver to be wearing, it notes. It’s moral significance and whether mask use is mandatory also influences people’s behaviour, says the report.

Rather than focusing on “technical specifications and efficacy”, campaigns should also emphasise values such as “solidarity and communal safety” to improve usage, it adds.

The authors acknowledge that the wide variation of materials and styles being use to produce masks does raise questions about their efficacy and reliability, but says public health policy must “consider the trade-off between efficacy and compliance”.

Certain societies have starting adapting the use face coverings into their cultural traditions such as in India where women have been using the loose end of clothing from their saree to cover their face during the pandemic, it notes.

The almost universal uptake of face coverings in some Asian countries during the pandemic also has cultural significance including the belief in these countries, prior to the pandemic, that people must protect their faces from potentially polluted air and other respiratory viruses, say the authors.

Personalised face coverings, which would promote masks as an accessory among populations unaccustomed to covering their faces, offers countries an opportunity to improve usage among the general public, says the report.