Volunteers are attempting to keep last whale hydrated at Rossnowlagh 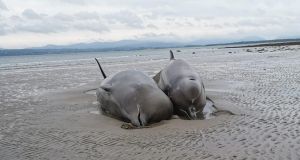 Seven whales out of a group of eight that became stranded on a beach in Co Donegal have died, the Irish Whale and Dolphin Group (IWDG) has said.

The group said it had been providing palliative care to the bottlenose whales, which were beached at Rossnowlagh on Wednesday.

A spokesman said “very little” could be done to help the “deep-diving offshore species”, which are the largest member of the beaked whale family.

The group said euthanasia of whales of this size very difficult without the drug Immobolin, which is not available in the Republic and that shooting requires highly trained personnel.

Nicola Coyle, a volunteer with the group, told Newstalk Breakfast the volunteers stayed late into the night with the last living whale.

The whales are from “quite an elusive species” and live far off shore, she said, adding it was unusual to see them so close to land.

The volunteers tried to keep the public away from the whales to make the mammals’ situation as stress free as possible.

“The first thing is to try and keep as many people away from the whales as possible – the guards were very, very helpful in doing that. And then it’s a matter of making sure that it’s positioned alright and keeping noise levels really, really low.”

The volunteers applied wet materials including towels and curtains in an attempt to keep the last living whale hydrated; this was similar to palliative care, she admitted.

“As first responders for the Irish Whale and Dolphin Group that’s one of the things that we do. So we assess the situation as soon as we arrive to see what’s the best course of action,” she said.

“If we know that we can’t refloat them, which in this case it was very clear that that wasn’t going to be an option, then our job is to try and keep them as happy as we possibly can.”