Storm Ellen: Up to 40,000 Cork homes left without power 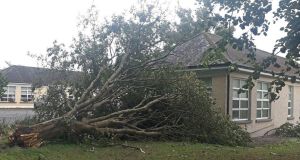 Up to 40,000 homes are without power in Cork with the county receiving the full brunt of Storm Ellen overnight.

The AA has warned extreme caution is needed, with trees down across the county and severe flooding in Skibbereen and Bandon.

Gusts of well over 100km/h were recorded in the southwest of the county. A gust of 143km/h was recorded at Roches Point in Cork.

The fire brigade assisted a woman in labour who was on the way to hospital from Crosshaven overnight amid Storm Ellen.

Victor Shine, second officer at Cork City Fire Brigade, was on his way home from work shortly after midnight when he came across Cork County Fire Brigade assisting an ambulance call for a woman in labour.

Mr Shine told the Opinion Line, on Cork’s 96FM, that he had to “roll up the sleeves”.

“I came across that lady first in labour in the car, and access out of Crosshaven was completely blocked by trees in all directions. So we just handled the situation until the arrival of the ambulance. The lady was removed to hospital where I expect she has a baby boy now.

“I was trying to encourage her to use my name [to name the child] or Storm something really exciting ! “

“Some of the calls were a little bit more interesting with a car on top of trees due to the driver maybe coming across it without observing it on the road. It was removed very quickly and the driver was able to go home safely. It was an exceptionally old historical tree in Mahon.

“We also had a caravan where a roof came off with some people inside, and some people had to be made safe. The caravan was secured and people removed. A lot of automatic car alarms went off with strong winds.”

There were reports of of multiple trees down in areas of the county – including in Skibbereen, Midleton and Fermoy. Debris was reported northbound on the M8 Cork-Dublin road and on the N40 South Ring Road.

Many major routes, including the N22 road to Killarney and the N25 road to Waterford, were badly impacted by falling trees.

Some of the worst impacted areas in the county include Skibbereen, Kanturk, Mitchelstown and Macroom.

Routes that were most hit include the N22 East of Lissarda, the N25 at Lakeview in Midleton, the N72 west of Fermoy and the R624 at Fota.

“If you come across something that is dangerous or something that has fallen please notify Cork City Council. We have the crews on standby and in place to go and address these issues.

“They should ring our customer services unit at 021 4924000. That will be manned by trained operatives who will take your call and send it out to the frontline staff.”

Bus Éireann has said there are diversions and delays on all their routes in the city and county this morning.

Locals reported a shed roof had landed in the middle of the road between Mogeely Village and Killeagh, with trees also blocking the road between Conna and Rathcormac. The road to Rochestown Nursing Home in the city was blocked as a result of fallen trees.

Motorists on the old Mallow Road in Cork city contacted gardaí amid reports of a trampoline on the road heading from Blackpool to Whitechurch. The road to Ballymaloe House in the county was also impassable due to fallen trees.

Minister for Foreign Affairs Simon Coveney tweeted that power was gone in his home town of Carrigaline with the area experiencing “heavy rain and some violent gusts”.

Jim Molloy of Cork County Council told RTÉ’s Morning Ireland that it was a tough night in the county.

“It caused a lot of chaos in the county in particular. We had about 50 [callouts] for trees and about 30 for flooding events primarily around Skibbereen which was badly hit. They were the primary events. Most of the trees down were in east Cork, but again the whole country was affected.

“There are still reports coming in as drivers get on the road. There is lot of trees and debris on the roads. Precaution is the word of the day,” Mr Molloy said.

In a statement ESB said crews are being dispatched in the most affected areas where safe to do so, assessing the damage so that they can restore power as quickly and effectively as possible. However, the ESB indicated some customers could be without electricity “for a number of days.”

“It is very important that any customers who use electrically powered medical devices should contact their healthcare professional to make alternative arrangements if necessary.”

All public parks will be inspected for damage and fallen trees before being opened and may open later than usual this morning.

Powerlines are down in a number of locations. People should not approach damaged power lines and should ring the ESB immediately on 1850 372 999.