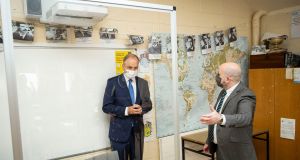 Taoiseach Micheál Martin has re-iterated the Government’s determination reopen both primary and secondary schools at the end of the month, warning that failure to do so would have a serious impact on the mental health and intellectual development of children.

Mr Martin said that he was very impressed with the measures being taken by schools all around the country to prepare for pupils returning to education and he had every confidence in both students and staff to “evolve and adapt” to deal with the new reality of living with Covid-19.

“I have always been deeply concerned about the loss of so much school time early in the year. I think it’s very important that we do everything we can to enable children and staff to come back to school safely. This will evolve. ‘Evolve and adapt’ will be the key watch words.”

Mr Martin, who was a teacher before entering politics, was speaking during a visit to Nagle Community College in Mahon in his Cork South Central Constituency where he was given a guided tour by principal Jim O’Sullivan to see the preparations first hand.

Asked specifically if there was some point next week that the Government might consider deferring the re-opening of schools if the numbers of new cases of Covid-19 continued to rise, Mr Martin said he did not envisage such a scenario developing as reopening schools was a priority for the Government.

The Taoiseach also rejected the claim that there was mixed messaging emerging from the Government and public health experts leading to confusion over what people need to do to stem the rise in the number of Covid-19 cases.

“There is no confusion about the fundamental issue here. I would advise everybody to examine [the advice of] Ronan Glynn, the chief medical officer in his video presentation last evening,” said Mr Martin.

“The overall message is very, very clear - we are asking people generally to reduce contacts in terms of different households, reduce the number of social contacts for adults. The numbers have gone up substantially in the last two weeks compared to a month earlier.”

It is understood that while public health experts have advised of the possible need for a return to a full lockdown, there is strong resistance in Government to any such move.

Mr Martin said: “This is all about balancing keeping the economy going. Keeping people at work is very important as we don’t want to revert to a lockdown situation.”

Mr Martin said a full scale lockdown as was necessary back in March, April and May would have a huge impact on Ireland both fiscally and economically but the way to avoid that was to work to keep community transmission of Covid-19 at as low a level as possible.

“The key thing is prevention and that is why the measures have been taken. The fundamental message is that we want people to reduce the mixing with other people, keep your contacts low and to keep physical distancing and social distancing.”

On the importance of reopening schools, Mr Martin said: “I know as a former educationalist myself and as a parent, the most fundamental thing in life is the educational experience for a child - we know the younger a child is, the more they learn- they learn far more early in life than they will for the rest of their lives.

Mr Martin said the new measures introduced on Wednesday, including limiting the number of people who can meet together, were aimed at curbing the community transmission of the disease so the safety of students and staff were not put at risk by reopening the schools.

“I must pay tribute to the teachers, SNAs, the school staffs and principals across the country for really working quietly and effectively over the last number of weeks to get their classrooms and schools ready for re-opening later this month,” he said.

Mr Martin ruled out serial testing of students and staff in schools but he defended Minister for Education Norma Foley amid accusations that she had gone missing, saying she had addressed the Dáil on the issue and he believed the Irish plan was among the best in Europe for re-opening schools.”

He said: “Teachers won’t have the same interaction [with each other as before] and pupils will get their own personal PPE on arrival and preparations will be in place for any emergencies. Anyone with symptoms will go to an isolation room and there will be linkages with local public health experts.”

Mr Martin confirmed schools are rescheduled to open in Laois, Offaly and Kildare at the end of the month as they are elsewhere in the country, saying that the lockdown measures introduced by the Government were working and were driving down the numbers of new cases in the three counties.