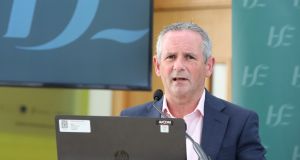 Paul Reid said on Thursday that comments by Eamon Ryan that the testing and tracing system had been ‘caught off guard’ last week do not reflect what happened. Photograph: Sam Boal/Photocall Ireland

HSE chief executive Paul Reid has rejected claims that the Covid-19 testing and contact tracing system was “falling apart”, saying that such comments are “alarmist” and “hugely unhelpful”.

Speaking at a briefing at UCD, Mr Reid said the HSE had tested 55,000 people over the last seven days, the second highest weekly total since the start of the Covid-19 pandemic.

He said the highest number of swab tests in one day took place in the past week when 11,000 people were tested.

There had been a 210 per cent increase in demand for testing in recent weeks, he said.

The HSE’s median turnaround time between referring a person for a Covid-19 test to the completion of contact tracing has reduced to 2.3 days from 2.8 days.

The health service has had to deal with “complex demands” tracing more people involving an extended number of contacts as well as dealing with language issues and translators given the number of foreign nationals who have tested positive at meat plants and food production facilities, he said.

Comments by Green Party leader and Government Minister Eamon Ryan that the testing and tracing system had been “caught off guard” “does not reflect what happened last week”, he said.

Mr Reid acknowledged there were “outliers” where some people were waiting longer for tests but he said that the HSE’s escalation plan to increase testing and contact tracing “had worked.”

The HSE “wouldn’t be thanked” for keeping swabbing centres open for up to seven days a week when there were just a handful of Covid-19 cases nationally, he said.

He rejected the view expressed by Tomás Ryan, assistant professor at the School of Biochemistry and Immunology at Trinity College Dublin, on RTE radio earlier this week that the HSE’s testing and tracing system was “falling apart.”

“We want people to come forward for testing and have demonstrated that the system is meeting demand, which it did last week,” he said.

He insisted the HSE had the capacity to increase to 100,000 tests a week if required.

Mr Reid said the health service was working with the Department of Education on guidance for schools on how teachers and students would be tested if Covid-19 cases are detected after schools reopen in the coming weeks.

The department was taking the lead on coming with guidance for how students would use school buses safely and would be working the HSE on this, he said.

The HSE chief said that the number of coronavirus cases in the State had reached 25.4 per 100,000, the third highest level in Europe for new cases.

The number of cases had increased from 50 per week to more than 600 per week, he said.

He defended the latest restrictions to curb the spread of the virus introduced on Tuesday against criticism that the measures are contradictory.

“Some commentators can make it far too simple, that we don’t need to make any trade-offs,” he told the briefing at UCD, a location of the HSE’s contact tracing centres.

Mr Reid said that it was “impossible to be simple” in dealing with this virus.

“Unfortunately, there is no black and white, we are going to live in a grey space for quite some time so there will be contrasts that people will struggle with but they are guided by the best public health advice,” he said.

The HSE corrected figures published earlier, saying there had been double-counting with one Covid-19 death in the past 24 hours, not two, and six cases in intensive care units, rather than 12.

Anne O’Connor, the HSE’s chief operations officer, said there was an error in the data last night.

Mr Reid said health officials would be carrying out serial testing across higher risk settings: direct provision centres with about 8,000 people at 80 sites, 30,000 staff across nursing homes and starting to test 50,000 workers at meat and food plants with workforces of more than 50 staff.

There were plans to test 15,000 nursing home staff every week, 8,000 direct provision residents a week and “substantially more” than the 2,000 to 5,000 meat plant works being tested this week, the HSE’s head of testing and contract tracing Niamh O’Beirne told the briefing.

Ms O’Connor said that there were 107 people staying at the HSE’s self-isolation facility at Citywest in west Dublin and that this figure had increased over the past number of months.