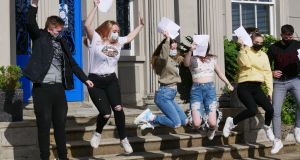 GCSE grades have risen significantly in Northern Ireland after students were awarded marks based on their teachers’ predictions.

The number of top A* and A grades awarded increased by 5.7 per cent to 37 per cent of all marks awarded.

However, students who were due to receive vocational BTEC qualifications on Thursday did not receive their marks. Awarding body Pearson is to regrade all its awards to bring them into line with schools’ and colleges’ predictions, and told centres on Wednesday evening not to release the marks they had provided.

This year’s exams were cancelled due to the coronavirus pandemic. The North’s education minister, Peter Weir, earlier this week abandoned plans to use standardisation when determining GCSE results following widespread controversy over the downgrading of A and AS level results.

The principal of St Ronan’s College in Lurgan, Fiona O’Kane, told the BBC the last 10 days had been a “complete rollercoaster” for teachers, parents and pupils and the decision to revert to teachers’ predictions at GCSE level had created “a much better air of calm” this morning in school.

“Nobody knows these young people better than their subject teachers who have worked closely with them and know all about their progress, their ability and their potential,” she said.

A and AS level students are to receive revised grades based solely on their teachers’ predictions on Friday.

Mr Weir said on Thursday that the North’s exam body, CCEA had completed the work necessary to revise the grades, and had sent the information to the university admissions body UCAS.

“The revised grades will be released to centres this afternoon with results available to students at 9am tomorrow, Friday August 21st.

“CCEA is also updating the appeals process in light of the developments this week and this information will be published on the CCEA website shortly,” he said.

According to the CCEA girls continued to outperform boys, with 91.5 per cent of girls’ entries awarded grades A*-C compared to 87.1 per cent of entries by boys.