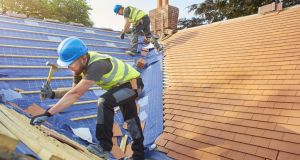 Denser housing with good access to urban centres is considered better than housing estates on the outskirts of towns. Photograph: Getty Images

It’s been called a “con job”, a “three-card trick”, and earlier this week, business leaders warned of its “grave implications for the economy”. There’s no doubt the Sinn Féin manifesto has been the most talked-about document of the election campaign.

The most eye-catching aspect is the promise to spend €6.5 billion providing 100,000 new public homes on public land.

Amid a hyper-charged political atmosphere on housing issues, it has prompted accusations that Sinn Féin is claiming it is possible to build houses for just €65,000 each,

But what exactly is the party promising? And is it credible?

In a word, no. But you could be forgiven for thinking that, given how it’s phrased in the manifesto. The party promises it will “build 100,000 homes over 5 years. This will include council housing and affordable homes for renters and first time buyers. Cost – €6.5 billion.”

This has given rise to the €65,000 figure – by simply dividing the €6.5 billion budget by the 100,000 homes. Sinn Féin housing spokesman Eoin Ó Broin told The Irish Times that included in the 100,000 figure are 50,000 social homes, which, he says, are already committed to and budgeted for under the National Development Plan. So half of the headline figure is to be achieved before the €6.5 billion budget is touched.

However, the implication is still that around €6.5 billion will pay for 50,000 new homes. That would suggest, by the same (fairly crude) measurement as above, that a home can be built for around €130,000. Can this be achieved?

In truth, there’s a lot of numbers that get in the way of analysing this policy. It’s easier to forget nearly all the sums listed above, because only two really matter: €50,000 and €234,000.

First up, the €50,000 figure. This is what Sinn Féin claims it will cost, per unit, to deliver the majority (some 30,000) of the 50,000 homes it has promised. It’s important to note that under the model chosen to deliver these homes, called affordable purchase, the €50,000 is not the cost of building the home, it’s the cost of each unit to the exchequer.

The best example of this model is the O’Cualann development in Dublin. It works because a site is provided by the state, almost free of cost. That site is often also serviced, meaning connected to utilities, at no cost to the builder (but there is an exchequer cost). Development levies are also waived. The remainder of the development cost is provided by loans, redeemed when the homes are sold.

The net result on O’Culann land is that three-bedroom homes retail for around €220,000. Sinn Féin has budgeted a cost to the exchequer for the waived fees, the site and the services of €50,000 per unit. Hugh Brennan, the chief executive of O’Cualann, says that the notional cost of most of his sites in Ballymun, where it has built homes, is around €37,000. Unsurprisingly, he is bullish about the possibility of rolling out the O’Cualann model around the country at a cost of €50,000 per unit. That figure, he says, is “not only credible, you’ll get change back”. He also argues that in reality, the exchequer is a net beneficiary due to economic activity during construction.

Of course, in the real world things would be more complicated; O’Cualann is the best example of this model in the state, but it has only delivered 50 units so far, with another 50 slated for this year. Whether the model can be ramped up to that scale, and at a level of €50,000 per unit, is open to debate. There is considerable skepticism among some well-placed sources about the feasibility of this.

The party has sourced the figure from a parliamentary question answered last year on the average cost of building one, two, three and four bedroom local authority new build units. According to the reply, the average all-in cost submitted by local authorities over the 12 months to April 2019 of a three bed, including VAT and non-construction elements, is €234,571.

Multiply that by 20,000 units and you get €4.7 billion. When you add in what Sinn Féin are allowing for inflation, the total cost of the plan is €6.469 billion.

The outstanding issue is whether 20,000 units can be delivered for an average of €234,000. You have to consider what contributes to that figure, but also what policy goals the State should have for housing in the future.

First of all, it’s important to note that the €234,000 is a national average. The PQ reply doesn’t make clear exactly what that average is composed of, but it is likely not entirely comprised of the kind of units that housing experts say we should be aiming to build in the future.

Given demographic, environmental and urbanisation trends, the generally held view is that future housing should be more dense than existing stock, closer to urban centres, allow for smaller household sizes, and that developments should contain a variety of different housing types to allow for different points in the life cycle. Basically, they shouldn’t be big, sprawling estates of three bed semi-detached houses on the edge of town, which are cheap to produce because construction on open land is easy and they’re all the same type of unit.

According to Ronan Lyons, an economist in Trinity College Dublin and property market expert, “when you look at where the country needs to be in 2060, we need significant increases in density and we need to accommodate much more variety in household type”.

It’s debatable whether all this can be achieved for an average cost of €234,000. For example, Dublin City Council apartment developments currently being developed in central locations are costing the local authority around €370,000 each.

It’s also worth looking at something called “unit cost ceilings”, which are limits imposed by the Department on what a local authority can spend on a new social housing unit. They’re higher than the cost of a new build as when the Department is drawing them up, the cost of acquiring units as well as building them is taken into account. But it’s still worth noting under these guidelines, the average figure permitted for spending on a three bedroom house in one of the Dublin local authorities is €292,500; for a two bedroom apartment, which may be more representative of the desired housing mix going forward, it’s €310,000.

For Cairn Homes (the state’s largest homebuilder) once the profit margin, VAT and cost of land are stripped out, the average cost of delivering a unit is understood to be between €200,000 and €250,000. But whether the State could achieve the same costs as a listed homebuilder is, again, up for debate. Sinn Féin believe that advances in construction techniques and economies of scale would play in their favour, but would they do so to a sufficient scale? And is that hope enough to rely on when committing such a huge budget? That is an open question.

Implementing such an ambitious building programme would also entail significant logistical challenges. Sinn Féin claim that changes to the stamp duty regime would refocus the construction industry away from commercial property and towards residential delivery, but the property market is dynamic and complex, so can this be taken for granted? One academic source, who asked not to be named, points out that local authorities and approved housing bodies have built, between them, about 120,000 units in the thirty years since 1990. “Building 100,000 dwellings over the next five years would be an unprecedented ramping up of construction and would be almost impossible to achieve in my view,” the source said.

There are more open questions: How would Children’s Hospital-style overruns be avoided? What if the inflation effect on building costs was significantly more than has been priced in by the party? Of course, this all also presumes that the revenue raising measures elswhere in the manifesto are effective.

The Sinn Féin housing targets in its manifesto are based on real data and the party has been transparent about how it has arrived at these figures, for which it should be commended. However, like many manifesto promises, its delivery would be contingent on some rosy assumptions, and a dash of magical thinking to get around some pretty serious logistical hurdles. Whether the plan could survive contact with the real world remains to be seen.

Is it possible? In the words of one property developer (who, it must be conceded, is far from a Sinn Féin voter): “It’s possible, but it’s highly f***in’ improbable.”