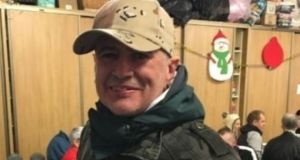 A former chef who worked with the Hilton Group in the UK, Timmy Hourihane returned to Ireland following the break-up of his marriage

A woman has been released without charge following questioning over the death of a homeless man in Cork. Gardaí will prepare a file for the Director of Public Prosecutions.

The woman (37) was arrested in Cork city on Wednesday morning for questioning about the death of former chef Timmy Hourihane.

Mr Hourihane died at Cork University Hospital in the early hours of October 13th after being found with serious head and body injuries on a green area in the Mardyke.

He had been found by firefighters who were called to deal with a blaze at his tent which was among a number of tents pitched in the area by homeless people.

The woman was brought to the Bridewell Garda station. Gardaí released her without charge shortly before midnight on Wednesday and investigators will now include her memos of interview in a file for the DPP.

Two men were arrested and questioned about the killing in December.Both were released without charge. A Garda spokesman said memos of interviews with both men would be included in the file on Mr Hourihane’s murder being prepared for the DPP.

Mr Hourihane was a familiar figure among the homeless on the streets of Cork, availing of services from a number of charities including Cork Simon, the St Vincent De Paul and Cork Penny Dinners.

A former chef who worked with the Hilton Group in the UK, Mr Hourihane returned to Ireland following the break -up of his marriage but he lapsed into alcoholism following the death of his partner, Michael, from cancer in Cork.

A native of the Sheep’s Head Peninsula in West Cork, Mr Hourihane is survived by his 83-year-old mother, Cathy, his brother, Denis, his sisters, Annemarie, Catherine, Nuala and Margaret and his son, Elliott (23), who lives in the UK.